Tamarindo News – In a country that boasts some of the best surfing in the world, it’s no surprise that the government is working on a plan to launch an official National Surf Day. 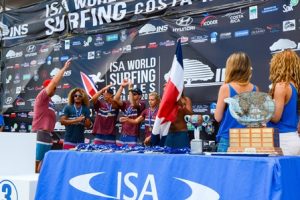 Last month, Melvin Núñez, a representative from Puntarenas, presented a Bill for this special day to the Legislative Assembly, and 53 deputies proceeded to sign it.

The project was drafted by the Costa Rica Federation of Surf along with Núñez, and was presented to the Secretary of the Assembly. An announcement about the National Surf Day proposal was made at a press conference afterwards to confirm that “the practice and development of surfing as a Costa Rican activity of tourist, economic and sports importance is of public interest.”

According to the Legislative advisory team of the Deputy, the project’s acknowledgment of the sport’s tourism contribution could be approved both by the Legislative and Executive branches in record time. The whole country would then celebrate that day every year on the third Saturday of October. With the signing, the first official National Surf Day will be 2020, a historic moment for the country’s popular sport.

The date was chosen by Núñez in order to increase visits to Costa Rica’s coastal zones in the low season, when tourism is needed the most.

“Specifically, the bill intends to promote institutions of the State to collaborate further with the Costa Rica Federation of Surf, and with private companies with the hope that there will be the realization of more international events carried out on Tico soil,” said the Deputy.

The government’s intention is to increase the promotion of surf in Costa Rica, a sport that generates millions of dollars a year thanks to the tourists who are drawn to this country for surfing. In fact, based on data ICT has released in previous years, more than 600,000 surfers visit Costa Rica every year, staying an average of 17 days and spending $122 per day. Randall Chaves, President of the Surf Federation, said that this announcement comes at a great moment in national surfing.

“The growth curve of this sport has been very pronounced thanks to the international results obtained recently, plus the realization of international events that the Federation has already carried out here in conjunction with private companies,” he said.

“We would be the first sport to have our own national day. The ICODER will soon confirm if it is surf that will inaugurate this type of initiative for the national sport.”

The draft Law is number 21241, was already signed by 53 of the 57 deputies and will go first to the Legislative branch, where it will be assigned to a Commission that approves it and votes on the plan, before it finally transfers to the Presidential House to be signed and published. The term of this signature process is intended to take no more than 12 months.

QCOSTARICA - For their preparedness to face tsunamis, the communities of...
Read more

QCOSTARICA - Changes in consumption habits in terms of times, types of preparation and specialties challenge the coffee sector. Most of the consumers in Costa...
Vaccine

QCOSTARICA - The OIJ uncovered a big pothole on Monday when it was announced that public officials had allied with construction companies that, apparently,...
Banking