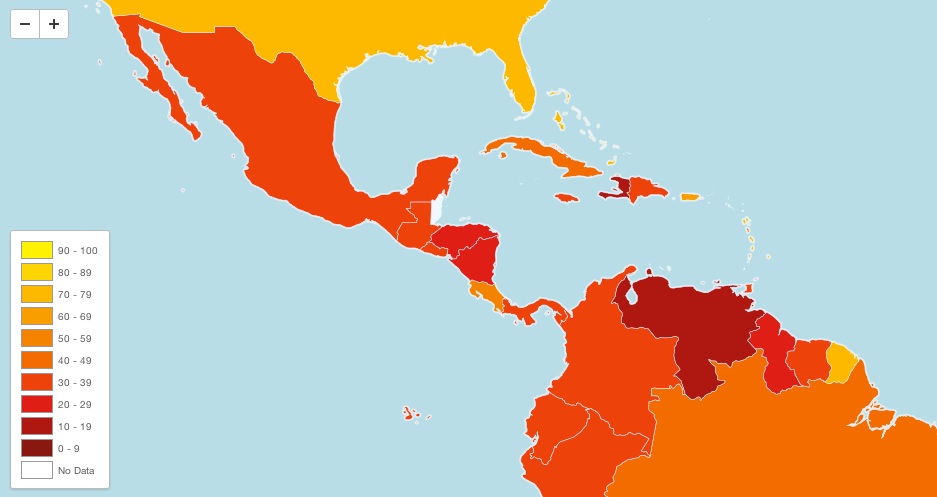 Costa Rica ranks 48th in Transparency International’s 2012 Corruption Perceptions Index (CPI) which measures perceived public sector corruption in 176 countries. Costa Rica’s score in the 2012 survey is 54 on a scale of 0 (perceived to be highly corrupt) to 100 (perceived to be very clean).

The 2012 CPI was calculated using an improved methodology which does not allow to compare the data with previous surveys.

The countries with the lowest perceived corruption in 2012 are Denmark, Finland, New Zealand, Sweden and Singapore. Meanwhile, Myanmar, Sudan, Afghanistan, North Korea and Somalia are found at the bottom of the ranking.

The CPI scores and ranks countries/territories based on how corrupt a country’s public sector is perceived to be. It is a composite index, a combination of surveys and assessments of corruption, collected by a variety of reputable institutions.

This year’s CPI scores were calculated with a new methodology, which means that the 2012 results are in no way comparable with those from 2011 or earlier years. However, the new methodology will make it possible to compare CPI results from different years from 2012 onwards.

Point estimates range from about -2.5 to 2.5. Higher values correspond to better governance outcomes.

In measuring transperancy, Transperancy International ranks Costa Rica 44th of 71, with a score of 77 and a value of 177.2 in the Financial Secrecy Index (2011).