Following the close of business Friday, the country will be working at half speed, as ministries, state agencies, utilities and banks will operate on special hours or close entirely, during the year end holidays. 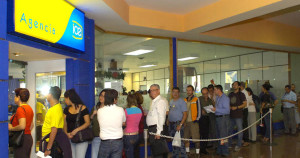 So, if you to interact with a government agency, for example, the Road Safety Council (COSEVI) for a drivers license renewal or testing, tomorrow is the last until the new year. The state insurer, the Instituto Nacional de Seguros (INS), for instance, says it will close its doors on Friday and back on January 2, 2014. Some state and public agencies don’t get back to full speed until Monday, January 6, like the Dirección General de Migración y Extranjería (Immigration service).

At the Instituto Costarricense de Electricidad (ICE), they explained by way of a press statement that the power and communications agency will operate “normal” hours during the holidays, closing only on December 25 and January 1 (both legal holidays in Costa Rica).

State banks (Banco Nacional, Banco de Costa Rica, Bancrédito) say they will be closed only on December 25 and 31 and January 1. Private banks (ie. Scotiabank, Citi, BAC, Davidienda) are expected to follow the same closures of the state banks, but important to check with your local bank for their year-end hours.

Many businesses shut down for the holidays, while retailers and malls will continue operating as usual, with possible extended shopping hours prior to Christmas Day and possibly with offers after. Unlike Black Friday, Boxing Day has yet to be picked up as a shopping phenomenon in Costa Rica, though some retailers will offer merchandise at discounted prices or special deals similar to Boxing day.

The important for visitors as well as residents to keep in mind is that there is “no uniform” policy on holiday hours. The rule is to check ahead and plan your schedule accordingly.

QCOSTARICA - Despite losing their home entirely in December, a Heredia received electricity bills from the Heredia Public Service Company (ESPH) for January and...
Immigration

QCOSTARICA - The International Monetary Fund (IMF) finally said yes to the loan for almost US$1.78 billion and to the fiscal adjustment commitment proposed...
Costarica History

QCOSTARICA - This year Costa Rica celebrates 200 years of independent life. And the road to commemorate the 200th has begun with the launch...
Coronavirus

Japan is beefing up measures against loneliness, taking a first major step toward comprehensively tackling a pervasive problem in the nation that has again...
Fuel Prices

QCOSTARICA - At 12:01 am this Wednesday, fuels will be more expensive, as the third price hike of the year takes effect. The increase in...
HQ

QCOSTARICA - A 30-year-old man, who posed as a dentist, set up an office in the garage of a house in Siquirres, Limón, where...
Guatemala

Q24N - Guatemala on Tuesday received 200,000 doses of the vaccine against covid-19 donated by India, which it will use to complete the immunization...
El Salvador