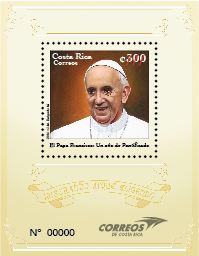 The Mexican jounalist visited Mora in Costa Rica last November and interviewed her on the condition that she would not reveal the content unless approved by Pope Francis. Mora’s message, Alarazaki commented on radio ADN Wednesday, was simple. 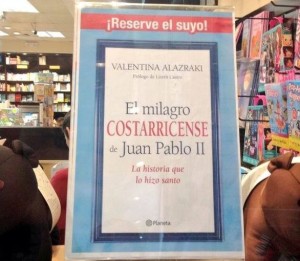 “I asked Pope John Paul to help me and he cured me,” Mora is quoted by the journalist. The Mexican knew John Paul II well, having accompanied him in this travels throughout the world. She was one of the 100 witnesses called to testify at John Paul II’s canonization proceedings when Pope Benedict put them on the fast track.

The late Pope was canonized as a saint in record time, the painstaking process finished May 1, 2011, the procedure spurred on by Pope Benedict XVI. A key piece of testimony came from Mora. ( At least two miracle are required in canonization precesses to create a saint.)

John Paul II will become a saint officially on April 27. The Alarazaki book will be released in Costa Rica two days earlier.

Meanwhile, only 15,000 of the portrait stamps have been issued, along with folders going out to collectors which contains the seal of Pope Francis and coincides with the celebration of the Pontiff’s first year on the Vatican throne. (In 2001, Argentine priest Jorge Mario Bergoglio was create cardinal by Pope John Paul II. Later he would become Pontiff.)

The presentation of the stamp was attended by Costa Rican Archbishop Jose Rafael Quiros. The stamp is available for sale at cage 10 of the Central Post Office in downtown San Jose, at the Zapote branch or at Tienda Virtual on the Web.

QCOSTARICA - Is there something worse than having a...
Nicaragua