QMENTIRAS – The unexpected success by Costa Rica’s national soccer team, La Sele, over Uruguay on Saturday caused huge losses in casinos and sportsbooks around the world, but mostly in Las Vegas, where so far the losses amount to several billion dollars worth. 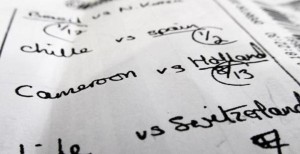 Betters could not believe the results. “We did not expect this, the odds were thousands to one, but for some strange reason, 3 people bet in favor of Costa Rica and there was nothing we could do, but pay”, said a spokesperson for one of the largest casinos in Vegas.

In Costa Rica, where sports betting is illegal, pushing the practice underground it is unknown of the scale of the losses.

One of the winners in Vegas, betting against the odds, was Robert Green. He told the media that when he bet on Costa RIca when he say the CR flash across a casino screen.

Another player, who preferred to remain anonymous after winning US$200 million dollars, also admitted to betting on the Ticos “by mistake”. The player said he was completely drunk at the time when placed the bet and admitted he knows nothing about ‘futbol’ (soccer) and that when he woke up he found a piece of paper with the bet. “I almost died of a heart attack”, said the man when he learned of his winnings.

A third player to break Vegas, though he will not show his face given that he is being sought by some “serious” people, said he had red the odds wrong, believing the pay out was 3-1 for and not against Costa Rica. “Why would anyone in their right mind bet US$10.000 to win US$3.000?”, said the man who is thanking his lucky stars for the win, or he would be in even more serious trouble with…

About QMentiras
QMentiras is a satire site, meant to entertain. Nothing on Qmentiras is real. It is all made up, fictional.

A view of Playa Hermosa, Puntarenas looking southwest from the Costanera. Photo by Ricardo Arce via Unsplash.
Health

QCOSTARICA - The Legislative Assembly approved Tuesday afternoon the first extraordinary budget for the fiscal year of 2021, which ensures ¢40.5 billion colones for...
Cartago

QCOSTARICA - Fog, light rain and very cold it was for those who had to leave home this morning in Cartago, due to the...
Nicoya

QCOSTARICA - Costa Rica's oldest, among some of the oldest in the world, got vaccinated against Covid-19 on Friday, January 15. They are Rainery Fonseca...
Health

QCOSTARICA - The Minister of Tourism, Gustavo Seguro, announced this Tuesday afternoon an agreement for private laboratories to help in conducting covid-19 tests for...
Politics

QCOSTARICA - The ambiguity with which the political parties' spending reports are written makes it difficult for citizens to monitor what type of digital...
News

QCOSTARICA - It was the month of February 1920 when the first 45 people affected by the so-called Spanish flu were reported, who arrived...