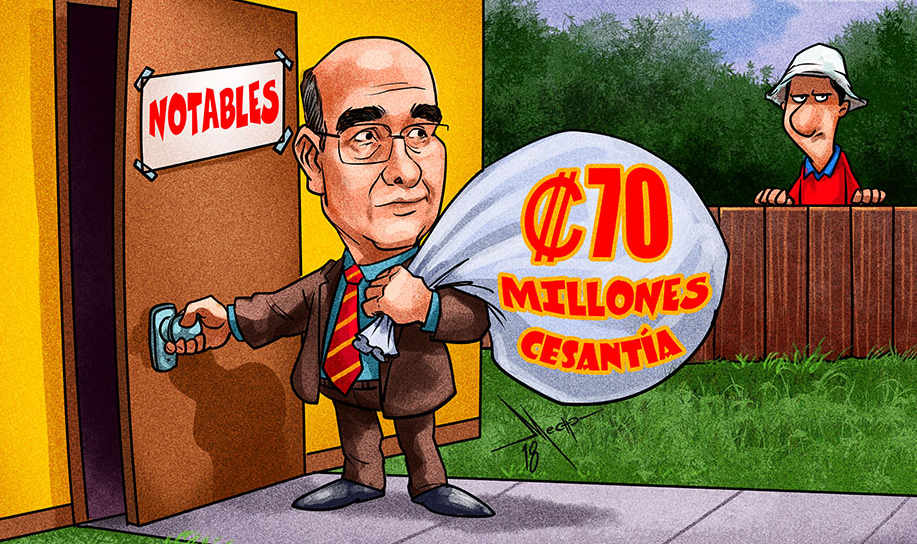 When the word mafia is mentioned, the first things that usually comes to mind are the likes of Al Capone, La Cosa Nostra, The Mob or Pablo Escobar. Well, the government mafia in Costa Rica is not as evil as those just mentioned but perhaps is more insidious.

Basically, over the years Costa Rica’s unions composed of government workers have enjoyed disproportionate perks at the expense of the country’s populace.

“During the past few decades, political, academic, business, and union leaders have hijacked the lawmaking powers in order to pervert the laws and create immoral benefits in the form of ‘luxury pensions,’ ‘luxury salaries and benefits’ for public sector employees,” according to one expert on the subject.

How did this all come about? Basically, by the government cowering to the unions during collective bargaining negotiations called, Convenciones Colectivas. As a result, the government workers enjoy outrageous salaries, pensions and other perks.

For example, employees of the University of Costa Rica (UCR) and the state-run petroleum company RECOPE enjoy high salaries and lots of juicy pluses. They say a janitor or bus driver at RECOPE earns a couple of thousand dollars a month and is entitled to many benefits. And that is just the tip of the iceberg because just one government institution is involved.

Another example of this abuse is the country’s “Luxury Pensions” or “Pensiones de Lujo” as they are called in Spanish. Briefly, said pensions are those received by retirees who did not contribute the necessary amount of quotes to receive the amounts they do. For instance, receiving a pension equivalent to 100 percent of the best salary reported or retiring at 50 years of age, privileges that were established under certain regimens particularly in the education sector and others from the Government in the past years. In other words, luxury pensions are retirement benefits that far exceed the money that the beneficiaries earned during their working life, which forces the rest of taxpayers to pay the difference in government taxes. Some of these luxury pensions are as high as US$23,600 per month.

Supposedly, there are currently 61,000 pensions considered “luxury pensions”, 43,000 from the education regimen and 18,000 from the Government. It is difficult to imagine that more than one million Costa Ricans — almost 20 percent of the country’s population — live in poverty while almost ten thousand receive “luxury pensions.”

One type of pensioners called “Ticos Con Coronas” (Costa Ricans with Crowns) receive an average monthly amount well above the average of a government employee’s pension. The privileges of ‘Ticos con Coronas’ amounted to 8.4 percent of GDP, in a country with a fiscal deficit of 6 percent of GDP. Around 3,800 pensioners or pensionados receive more than US$5,000 per month for a total of US$228 million annually.

As one person stated, “To add to this problem Diputados or congressmen are grossly overpaid and they have the power to increase their own wages. At one point in time, they increased their salary by as much as 25 percent within a two year period. Also, they are given free cars and spend large amounts of money on lavish parties, travel with taxpayer money and enjoy their full salary for life once their term is over.

To add to this mess is “tortuguismo”, a term used in some cases to refer to the slow-moving governmental apparatus and bureaucratic jungle.

I remember my wife had a friend who worked for one of the ministries. My wife said that every time she tried to call her friend at work, the latter was always on a coffee break. There is also a joke about government workers that says. “After the weekend Government employees wait until Monday to rest”. Don’t get me wrong! There are many dedicated and hardworking people in the government.

Sadly, it is very difficult to fire a public employee, even if the person is caught stealing or committing an act of corruption. First, months of paperwork is required and there are various appeals through a series of institutions and sometimes courts. During that time the worker is usually paid a full salary. The process is very tedious and can take years.

To the government’s credit steps are being taken to limit the excessive amounts of pensions in the future. President Carlos Alvarado believes that “pensions are to protect not to get rich,” so he is trying to develop a series of actions aimed at making the country’s “pension systems fair and sustainable.”

It is about time to stop the abuse.

RICO's COVID DIGEST - Given the exponential increase in...
Health