Could Latin America be a great investment opportunity in 2019? 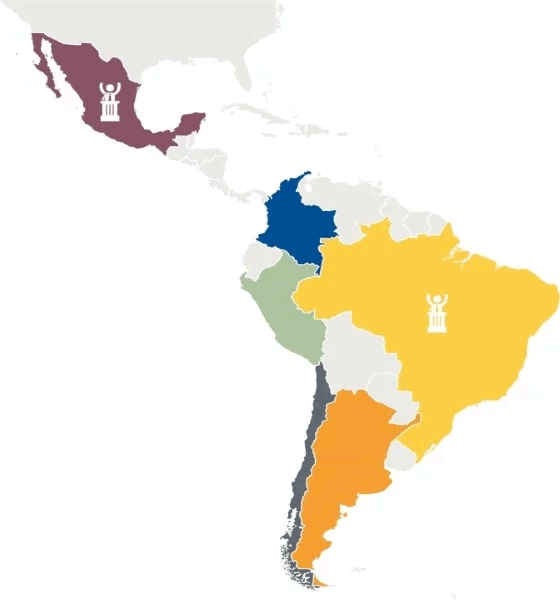 Latin America is generally viewed as comprising twenty independent sovereign states, stretching from Mexico to Cape Horn. As well as the countries shown in the infographic below, it includes Panama, Venezuela, Costa Rica, Guatemala and ten more nations.

While there are challenges to overcome, we believe the investment outlook for Latin America as a whole is quietly encouraging, making it one of our key investment themes in 2019.

In the 1980s, the region was characterized by hyper-inflation, dictatorships and state-ownership of assets, but today the principles of democracy and economic liberalization are more in evidence. The macro-economic picture for much of Latin America is currently supportive, but there are also long-term tailwinds which suggest the region could outpace its developed market rivals in the years ahead.

Latin America has an excellent demographic profile compared to much of the developed world. Its working-age population is forecast to grow by 18% between 2015 and 2030 and, together with significant growth in the middle class, this will translate positively for many domestic industries.

Investment-wise, Brazil and Mexico dominate the region, representing over 84% of the MSCI Latin America Index as at October 2018. However, Argentina, Chile, Peru and Colombia also have relatively substantial financial markets. Together, the economies of these six nations represent 477 million people, with a combined GDP of nearly US$5trn. Economically, this is on a par with Japan.

Investor opportunities in Brazil and Mexico

Argentina’s many problems have been well documented, but it is far from representative of the region.

Both Brazil and Mexico will start 2019 with relatively new presidents. They are at polar opposites of the political spectrum, but each is a populist whose election may not be the calamity that some initially feared. While Brazil’s Jair Bolsonaro has been likened to Donald Trump, given his penchant for hyperbole, he could be the right man to deliver much-needed economic reform and liberalization.

Recovery is on the way

The banking systems of both these economies have relatively few bad debts and, although both Brazil and Mexico have suffered from an extended period of weak domestic demand, recoveries are now underway.

One of the biggest issues for both Brazil and Mexico is the fact they have been running budget deficits on a near permanent basis, although they are hardly alone. In a global context, their public debt as a percentage of GDP is not extreme. Both economies have also comfortably financed their current account deficits through long-term sources, rather than relying on the vagaries of short-term funding.

Making the most of investment opportunities in 2019

If, as we believe, the investment environment is supportive for equity markets in 2019, we may seek to introduce an exposure within portfolios if an opportunity presents itself.

- Advertisement -
Paying the bills
Previous articleCosta Rica Tops In Medical Tourism – Getting Medical Care in Another Country
Next article“He is a traitor”, Ortega’s reaction to the resignation of Rafael Solís

QCOSTARICA - With the intention of protecting minors, a...
Trends