The Criminal Court of Pococí imposed on Tuesday night, six months of preventive prison against an individual named Chaves Castillo, arrested as a suspect of the crime of rape against an American in Tortuguero, confirmed the Public Ministry on Twitter.

The measure was issued at 7:55 p.m. by judge Ricardo Valverde, after a hearing of almost two hours. 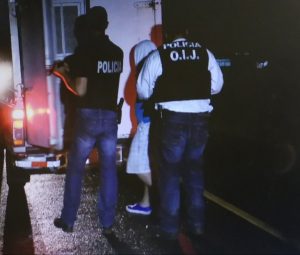 The arrest of the 20-year-old suspect, a native of Nicaragua and who is captain of a vessel, occurred on Sunday night by Officers of the Operational Support Group (GAO) of the Ministry of Public Security (MSP).

According to the police report, the sexual attack occurred inside a boat, which apparently, once a turtle tour was over, he is alleged to have invited the woman to take a (private) boat ride, in which he took advantage of for the abuse.

The 10 minute boat ride was between the town of Tortuguero to the village of San Francisco.

The tourist, named Preston, identified the man as her aggressor, so the officers proceeded to stop him and then take him to the dock in Tortuguero.

A man who worked as a security guard was sentenced to...
Read more

Q MAGAZINE - he former Miss Costa Rica and television personality, Natalia Carvajal, broke the silence of her arrest several weeks ago at the...
Reports

QCOSTARICA - Sunday night, 432 of the 1,188 covid patients in hospital are in Intensive Care Units (ICU), after suffering complications from covid-19. In the...
Trends

The trading world is full of trading strategies that vary by assets, timeframes, and, of course, technical indicators. In this article, you will learn...
Health

QCOSTARICA - Applying 150,000 doses per week of the covid-19 vaccine and establishing stricter vehicle restrictions temporarily, are the two main proposals of the...
Coronavirus

The German health minister, Jens Spahn, said that despite falling daily cases of the COVID-19 in Germany, caution is still needed. "Everyone will experience this virus," Spahn...
Business

QCOSTARICA - 2020 was marked as a complex year worldwide due to the Covid-19 pandemic, however, the following are entrepreneurs who were not only...
Coronavirus