For the first time during the daily conferences, the minister of Health and president of the CCSS wore a face covering, respecting the new measure in effect Monday 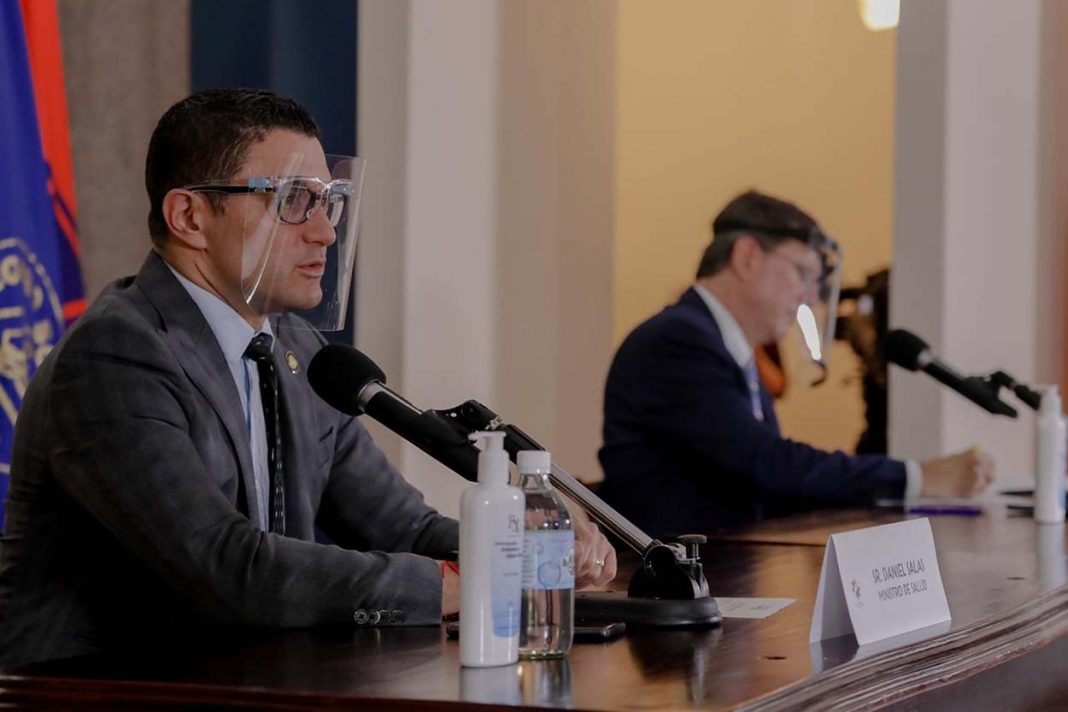 (QCOSTARICA) With 420 new cases reported this Monday, the number of people infected with COVID-19 in Costa Rica increased to 11,534 in 81 cantons, while the death toll rose from 62 to 66 in the last 24 hours.

Hospitalizations are also on the rise. Interned persons went from 241 to 259; 47 of them remain in an Intensive Care Unit (ICU). They are people between the ages of 35 and 83. The National Children’s Hospital reports none of the 7 children currently in hospital require intensive care.

Of the hospitalized, a total of 79 are in the COVID-19 center (Ceaco), with a maximum capacity of 88 people, and the rest are in the different medical centers in the country.

As for the latest victims of the virus, health authorities detailed that they are three men and one woman. They all had risk factors:

They did so in compliance with a new guideline, in effect on Monday, which requires the use of this face mask or shield in closed places. The measure does not apply to homes or family compounds.

The conference on Monday was preceded by the confirmation of the esignation the director of Health Surveillance, Rodrigo Marín Rodríguez.

Marín resigned after admitting that he failed to comply with the sanitary protection measures during a boat ride that he carried out this Sunday in the Gulf of Nicoya.

In making the announcement, Salas expressed “deep gratitude” for his former director of Health Surveillance for the work carried out during the pandemic and highlighted his attitude for having recognized his mistake.

“It is a fact that he committed a fault (…) I want to express appreciation to him because he has taken pains to try to move the country forward in the midst of this very difficult pandemic. Thank you for recognizing your fault,” he said.

They have not yet chosen Marin’s replacement, who will return to his regular position at the Ministry of Health.

“We are evaluating who can be the one to assume (the position). They must meet a certain profile and from the administrative and legal point of view with all the requirements that come with being a director at the central level in the ministry,” said Salas.

For his part, Roman Macaya opened is comments with regret and annoyance of the disrespect circulating in the social networks, a video showing him partying it up on a yacht. Macaya was emphatic that he did not make such an excursion, evidenced by his personal presence at the conference table at the time he is cruising as alleged in the video or any trip on a boat this year.

In fact, said Macaya, there are some 8 such videos circulating the social media. “The video was all elaborated, someone took the time to make it. It is false,” said Macaya.

- Advertisement -
Paying the bills
Previous articleWho can drive and where today, Monday, July 20
Next articleConstruction and tourism exempted from VAT for a year

QCOSTARICA - This Tuesday afternoon the government announced that...
Latin America