Carlos Alvarado assured on Wednesday a specific date will be set for the resumption of commercial and tourist flights.

Carlos Alvarado assured on Wednesday a specific date will be set for the resumption of commercial and tourist flights.

(QCOSTARICA) A record 147 confirmed cases in 24 hrs of the COVID-19 was reported Wednesday by the Minister of Health, Dr. Daniel Salas, during the noonday press conference from Casa Presidencial.

Since the first day in June, cases have been piling. Gone were the days of April when daily cases were less than 30, dropping to less than 20 and on many days less than 10 in May. In fact, at the end of May, the accumulated cases of COVID-19 were 1,056.

Then June came along. Restrictive measures were relaxed, including the circulation of vehicles to 10 pm, and more economic activity was allowed to resume. On June 3 a record 52 cases were reported, surpassed on June 7 with 55 and then a never imagined 86 cases on June 10.

On June 19, a reported 119 cases forced authorities to take back the announced phase 3 reopening to have occurred on June 20 and stricter restrictions for the weekend, instead of the anticipated Father’s Day shopping weekend.

Another record is the 30 patients hospitalized, of which five are in intensive care.

The increase has also meant more cantons and districts added to the list under an orange alert, on Wednesday, Corredores made the list. 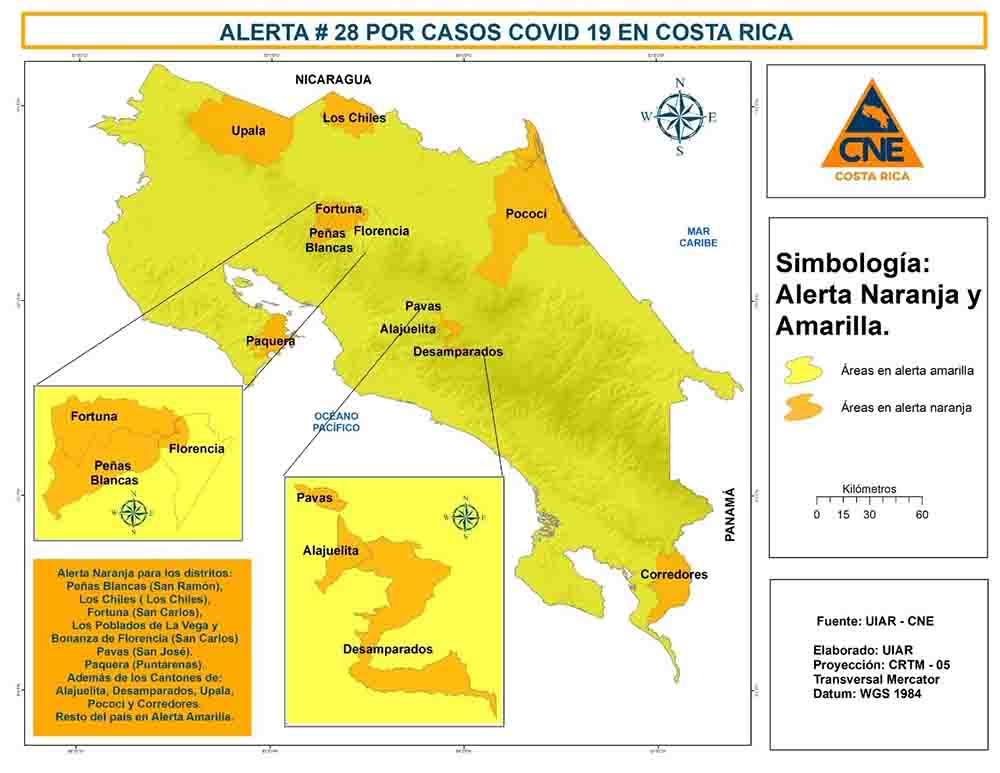 President Carlos Alvarado took the podium on Wednesday, assuring that in the face of this “worrying” record number of cases, a balance is sought between the protection of health and the economy.

“While we are going to continue protecting the health of Costa Ricans, we will continue to advance in a studied, calculated and calibrated way, with the openings of our economic part,” he said.

That is achieved, he said, under the concept of “martillo y baile” (hammer and dance).

“Thus, in the affected localities, where epidemiological information determines that restrictive measures such as those announced have to be applied, the hammer is applied, with greater closure and containment for the protection of health, but there are other areas where it is not the case, there are areas of the country where the number of infections is very low compared to other parts. In these areas, progress can be made provided the information so provides.

“With the openings, (there will be) always strictly following the protocols, hygiene measures, taking care of physical distance and so on, under this strategy we will advance in this third phase as we had scheduled the openings. It will always be done under the information of science, data that the Ministry of Health, the Costa Rican Social Security Fund and the National Emergency Commission have,” he declared.

In the remainder of the week, the implementation of the strategy in different regions will be announced. Also, he said, a specific date will be set for the resumption of commercial and tourist flights.

On the “humanitarian corridor” or refuge for 13,000 Nicaraguans, that has been the subject of speculation the last couple of days, President Alvarado was emphatic that “its not convenient for Costa Rica’ and despite self-serving reports and fake news, it will not happen.

Previous article“Costa Rica is going to hell in a handbasket!”
Next articleCosta Rica will announce this week date for return of tourists

Let us guess that you've got a grandiose idea...
Fuel Prices