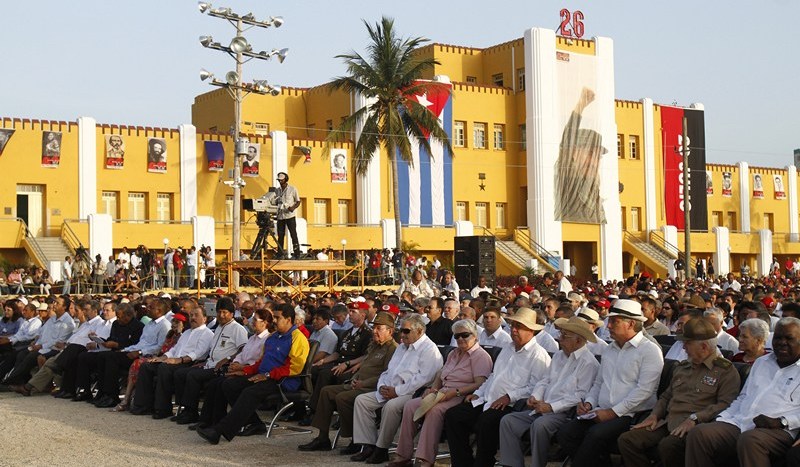 Cuban residents in Venezuela on Saturday celebrated the 63rd anniversary of the attack on the Moncada Garrison with a political-cultural event at the Main Theater of this capital.

During the ceremony, on behalf of the Cuban missions in Caracas, Jacinto Gomez stressed the importance of that action, which paved the way for the armed struggle against the dictatorship of Fulgencio Batista in Cuba, which defeated in 1959 by the revolutionaries led by Fidel Castro.

In that regard, he recalled the work and ideas of the leader of the Cuban Revolution, whose birthday Cubans will celebrate soon and to whom the gala was dedicated.

Diplomats, doctors and health collaborators, journalists and other Cuban representatives who are complying in Venezuela with commitments made by both Revolutions to improve the lives of people, also attended the event.

The delegation of the Cuba-Venezuela Solidarity Movement also participated in this activity. This group will also attend an event in support of the governments and peoples of the two countries to be held on Wednesday, July 27, in the Dominican Republic.

The attack on the Moncada Garrison, on July 26, 1953, was the first action of the political and insurrectionary movement led by Fidel Castro, which was later named after this event and that led the struggle against the Batista tyranny.

Despite being a military failure, the action proved that fighting the dictatorship with the arms was possible and there was a political force in the country that was willing to take this way.

QCOSTARICA - For today, September 19, vehicles with EVEN...
Consumption