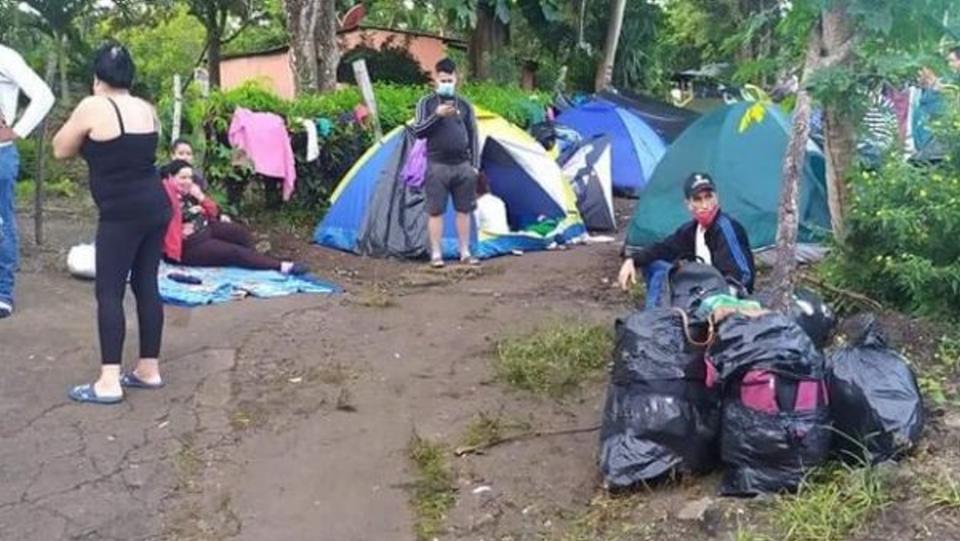 In a small tent, in an improvised encampment at Penas Blancas, on the border between Costa Rica and Nicaragua, are Cuban citizens Leidy Laura Cantillo and her husband, both 28. They’ve been there for nearly a week.

They left Cuba for Panama in mid-January, and now are trying to continue their journey north to the border with the United States.

The day they arrived, there were some 70 tents already there, with an average of two refugees in each. However, they stated that in the last 72 hours the number of people has increased greatly.

Some media sources report that there are now 200 Cubans in the encampment, hoping that the Nicaraguan authorities will allow them to pass through. They fear they could be thrown out of the camp at any moment.

“The situation is very complicated, because there are many children in the camp, and the sanitary conditions are very poor,” Cantillo told the digital news outlet 14ymedio on the phone, using the popular phone application WhatsApp. “My husband was sick with high fevers that we attribute to a possible Dengue infection because there are lots of mosquitos here and we are full of bites.”

In Santa Clara, Cuba, both young people lived and worked with a network of “mules” that import merchandise from a number of countries of the region in order to sell on the informal market.

“Mules” get their trips paid for and a moderate cash payment for allowing the real importer to use their baggage allotment when entering Cuba. From the beginning, that was only a job, so we could get together the money to leave Cuba. We’ve always dreamed about not having our children be born elsewhere.”

A visa to buy merchandise in Panama smoothed the way for the couple, who had no way of foreseeing that the pandemic was about to impose a brusque change to their plans. “We remained in Panama with no money, no friends and without the possibility of working. We decided to continue on the route, and try to beg for a humanitarian gesture, so that we’d be allowed to enter the United States, where we have relatives.”

Cantillo emphasizes that both she, with a degree in Economics, and her husband, a chemical engineer, wouldn’t be “a burden to anyone”. However, for the moment, the dreams they share are mired in “an encampment full of mud and filth.”

“We’re human beings, we don’t deserve to be like, like animals,” she laments. “The only thing we’re asking for is an opportunity to get ahead with our own effort. We don’t want a handout, but only that they let us into a country with opportunities and freedoms, something we don’t’ have in Cuba.”

Cantillo clarified that the majority of the Cubans in this improvised tent city arrived directly in Costa Rica to ask for political asylum. In 2019, that Central American country received more than 1,800 requests for political asylum from Cubans, who have become the third largest group of migrants seeking refuge in Costa Rica, after the Venezuelans and the Nicaraguans.

Under the name “Caravan for United Cubans”, the refugees have been backed by a Change.org petition, that at the moment has only attracted a little over 100 signatures.

Even though testing is not available for citizens inside Nicaragua, the government of Daniel Ortega is not allowing anyone, including Nicaraguans, to enter the country unless they have a negative test for COVID-19.

In addition, Costa Rica has imposed mandatory testing for anyone leaving Costa Rica for Nicaragua. The measure is in response to the situation where hundreds of Nicaraguans were stranded in between borders, their government not allowing them in for not complying to the COVID-19 testing.

- Advertisement -
Paying the bills
Previous articleBridge over the Coronado River, in Costanera Sur, will be closed for 3 weeks
Next articleNicaragua and the Myth of the Mestizo Nation

Nicaraguans continue stranded at the doorsteps of their homeland

(QCOSTARICA) An estimated 300 and up to 500 Nicaraguans remain stranded...
Read more

Costa Rica and Nicaragua: a border drawn by the covid-19 pandemic

He brought in a bag the avocados that his aunts gave...
Read more