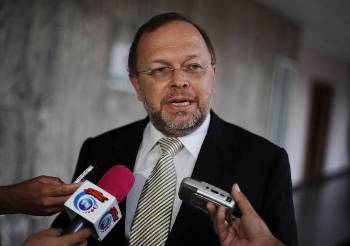 Crusading Costa Rican prosecutor Francisco Dall’Anese has resigned from his appellate court judgeship without explanation. The prominent attorney had completed a United Nations post in Guatemala he took in August, 2010.

Dall’Anese was Chief Prosecutor in this country between 2003 and 2010, when he headed up the team that put together cases against ICE-Alcatel and the Caja-Fischel, ending in prosecution of ex-presidents Rafael Angel Calderon and Miguel Angel Rodriguez.

While in Guatemala for the United Nations, he was in charge of the International Commission against Impunity, legally duelling with that country’s corrupt politicians who had escaped punishment. His Spanish predecessor had resigned the post in disgust at roadblocks put in his way by portions of the government.

Dall’Anese also complained bitterly of a lack of support by the Guatemalan government, but doggedly forged ahead. After leaving that post, he was scheduled to take a magistrate post on the appellate court at Goicoechea.

(DW) Jon works for the local government in the US state of Virginia. The 40-year-old received both his COVID shots in April. Most of...
Quepos