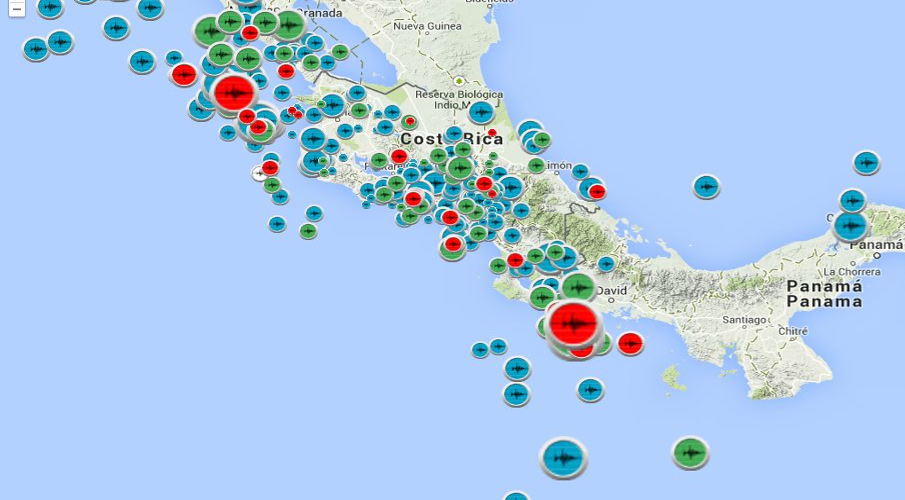 QCOSTARICA – A strong earthquake woke many in Costa Rica this morning. According to the OVISCORI, the quake had a magnitude of 6.8 on the Richter scale.

A number of sources reported the quake occurring in David, Panama.

The shaking was reported intense in the Southern Zone, while in the Central Valley it wasn’t felt as strong, but a long one.

Javier Pacheco, OVISCORI seismologist says there were cases of falling objects, but no damage or injuries were reported.

On Saturday, a 5.8 quake hit the country, produced by an interaction of the Cocos and Nazca plates.

Editor’s note: It was a few minutes before 3am when, sitting at my computer (in San José) when I felt a weird and strange sensation, like one feels on a boat: a gentle swaying movement. Could it be an earthquake or just my imagination? It wasn’t until the end, what seemed almost a minute, that the movement was felt strongest, no longer a gentle wave, but a second or maube two when the entire house shook, confirming that it in fact was an earthquake. Didn’t need to go (did anyways) to the Oviscori and USGS websites to know it was a strong one.

- Advertisement -
Paying the bills
Previous articleOnly 2 In 10 In Costa Rica Believe Now Is A Good Time To Buy A House or Car
Next articleQuid Por Quo: Pinto Replaces Medford in Honduras