Edgy fashionistas: Latina celebs who take chances with their style

It’s no secret that Latinas tend to have a spicy flair and showcase their own sense of style. From the curve-hugging, bodycon dresses worn by Sofia Vergara to the fun, surfer-babe style of Cameron Diaz, Latina celebs seem to enjoy creating a trademark style with a fashion flavor they can be depended upon to dish out appearance after appearance.

Some Latina celebs step outside the norm of what’s hot at the moment and display some hair and wardrobe choices that are more edgy than we’ve come to expect from our sisters.

Here’s a list of some famous Latinas who have an edgy style that they’ve made their own! 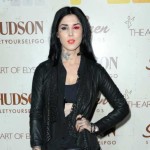 She got her first tattoo at the age of 14 and became a tattoo artist when she was just 16 years old. Kat’s edgy style includes tattoos across her face, neck, and covering most of her exposed limbs.

Her wardrobe choices are often provocative with a lot of flesh being flashed and we can’t help but love her usually pin-up girl styled hair and retro makeup.

Shakira (Colombia)
Now, we know that lately our beloved Shak has been all moms-style and we’re digging it but we couldn’t help but notice her flaunting her post baby body in ways that most new moms might not.

On the cover of Self Magazine’s September 2013 issue, Shakira pulls up her black tank top to expose toned abs that not many women have, even before having children.

While this may not be edgy in the typical sense, we’re sure mothers everywhere were a bit aghast (and envious) of Shakira’s lack of modesty and willingness to brag about not just her hips but her post baby six-pack.

With a rockin’ bod, we’re not complaining about Morena’s choice in clothing. The “Homeland” actress wears red carpet gowns as well as designer denim like it was sewn onto her body.

Her edgy style though, is expressed most often in her choice of hair styles! From pixie cuts colored peroxide blonde to her natural dark brown locks grown long, her willingness to change her look drastically from one day to the next takes some self-confidence that most of us only dream of!

Half Puerto Rican actress Aubrey Plaza is best known for her role as the lazy college intern on NBC’s hit comedy Parks and Recreation. On the show, she can be seen in baggy pants and sweatshirts and, well, real life is not much different! She makes our edgy list as her hipster style is one not often embraced by Latina celebs.

She’s been spotted sporting the trademark hipster mustache as well as her movie’s hashtag, #thetodolist, written across her chest. When dressed up for an event, we can’t deny her sex-appeal and stunning features but what sets her apart from everyone else is her quirky, comical approach to herself and her style.

From the fun to the absurd, Latina celebs have a style all their own. Who did we miss? Anyone else have an edgy style that has you wondering what they’ll walk out of the house wearing next?