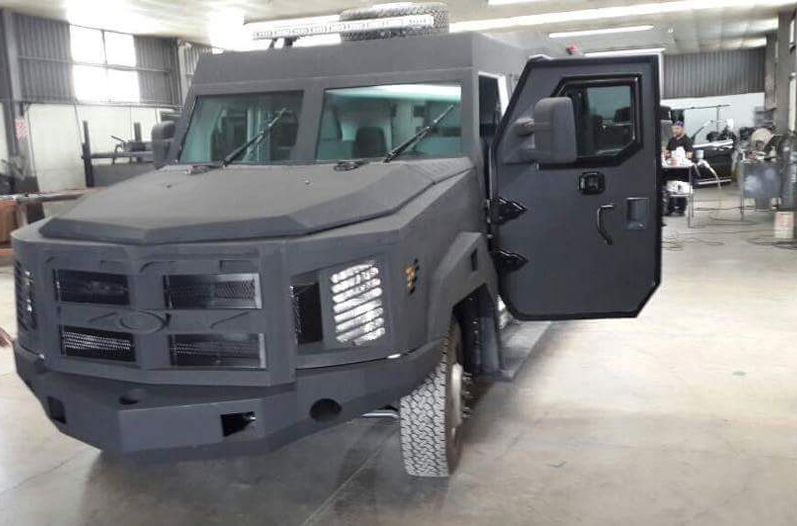 At a cost of US$142,000 and months in the works, El Protector, as it was baptized by agents of the Organismo de Investigacion Judicial (OIJ), the modified Ford F350 is also a “shield” for police working to take down the criminal elements in the country.

The armoured vehicle will be used by the Special Tactical Response Service unit of the OIJ (Servicio Especial de Respuesta Táctica – SERT) in raids and other special operations and to transport dangerous prisoners, as well as illegal drugs and money seized from organized crime gangs.

“We now have a protector for the boys to work more safely, especially in cases where they could face confrontations,” said Luis Ávila, deputy director of the OIJ.

The chief added that the  that the vehicle will be extremely useful in areas where “agents have been threatened and attacked”.

In its debut, the El Protector went into service at 4:00am Friday, in two very dangerous areas.

The first was in Leon XIII, Tibas, where the OIJ took down a 24 year-old man identified by his last name, Acosta, wanted for the attempted murder of a 61 year-old man and his 17 year-old son, also residents of Leon XIII.

Two hours later, El Protector was in San Juan de Santa Barbara, Heredia, where agents took down a 57 year-old man identified as Ramos, his two sons (29 and 31), linked to a shootout with another.

Avila would not disclose the details of the vehicle’s special characteristics, such as its resistance to bullets and fire power. What we do know, from past reports here at the Q, is that El Protector is fully armoured, completely covered with steel plates, making it almost impenetrable and retaining its original parts: chassis, engine, dash and front seats, everything else is modified.

Comfort was the not built into this vehicle that can accommodate up to 17 people, is hermetically sealed and is not air-conditioned.

The modifications, including the armour, were done locally.

According to the Ford dealer in Costa Rica, the F350 is only available in the country by special order and takes some three months to arrive.

For now the El Protector will be an only child, the OIJ says it has no immediate plans to acquire others.

- Advertisement -
Paying the bills
Previous articleSolis Believes That Pope Francis Referred To The Costa Rican Model In His U.N. Speech
Next articleCosta Rica Rice Crop Failure Due To Drought: Could This Be A Blessing in Disguise?

QCOSTARICA - A bill being discussed by lawmakers would...
Costa Rica Retro

COSTA RICA RETRO - This is how San José...