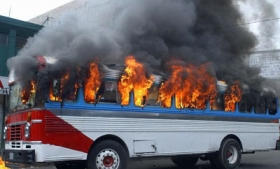 Extortion fees demanded by gangs from El Salvador’s bus companies have doubled in the past year to $3 million per month, another sign of the problems inherent in the country’s waning gang truce.

According to El Diario de Hoy, extortion fees can vary, but now total approximately $36 million per year and cost companies between 10 and 25 percent of their monthly income, leaving some on the brink of collapse.

Bus company owners consulted by the newspaper stated that in December the street gangs responsible for the crime imposed significant increases in extortion fees. Going to the police is of little use, as these reports are frequently relayed back to the gangs, which have been known to burn buses or issue threats as a result.

“If the transport companies report these acts to authorities, we haven’t even left the meeting before the street gangs double the fee as a reprisal,” one bus firm owner told El Diario de Hoy.

Companies also face the problem of being extorted multiple times as they pass through territory dominated by different criminal groups.

The case of El Salvador’s bus sector adds to claims extortion — already a major problem — has risen in the country since the implementation of a truce between the Barrio 18 and Mara Salvatrucha (MS13) street gangs in March 2012. This has also been seen in an accelerated rate of small businesses shutting down due to extortion.

Bus extortion has also apparently been gaining ground since a 2012 operation that put elite security forces agents on buses to combat rampant extortion was ended a year later due to its overwhelming cost and a lack of funding.

Rising extortion has been a major complaint of truce critics, who suggest increases in other serious crimes — including disappearances — are being ignored in the quest for homicide reduction. Amid popular concern that the gangs are the actors truly profiting from the pact, the anti-truce political opposition leads the polls for next month’s elections, which are likely to result in the formal end of the truce.

Extortion of bus companies and their drivers is also a major problem in other countries throughout the region, including Guatemala, Honduras, Peru and Colombia.

NYTimes  (MEXICO CITY) - As soon as the nurse...
Economic Recovery