Elderly Man Dies In Fire, Could Not Escape From His Home

Don José Madrigal Salas, was the victim of his own prison. 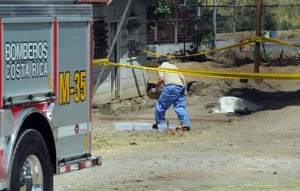 The 93 year old man who live alone, was burned to death when his small wooden house was consumed by fire in minutes.

The man believed that by barring windows and doors with wood he would not become a victim of criminals. Unfortunately it was for this reason he could no escape the flames.

The elder, who was visited by a nephew occasionally, used candles to light his home and would only turn on the television for brief periods of time, worried he could pay the electric bill.

In the fire that occurred Monday morning in La Uruca, neighbours tried desperately to rescue Don José, breaking walls to get him out. Unfortunately they could not get to him in time.

QCOSTARICA - Faced with wasting a vaccine dose when people in the priority groups scheduled do not show up, and a substitute cannot be...
Reports