Eliseo Vargas Off To Jail! 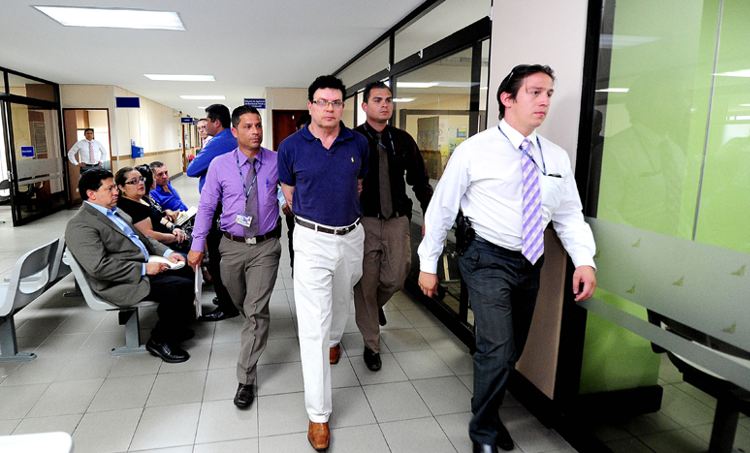 Eliseo Vargas García , former president of the Caja Costarricense de Seguro Social (CCSS) and the link that unraveled corruption and embezzlement in high places, leading to the conviction of former President Rafael Angel Calderón and others, is off to the La Marina prison, in San Carlos.

Vargas was picked up by judicial agents on Wednesday while playing raquetball at the San José Palacio hotel, in La Uruca. It was also is 60th birthday. He did get to finish the game, but not able to blow out the candles on the cake!

The detention came after judge Adriana Tenorio Jara, of the Tribunal Penal de Goicoechea, signed an arrest warrant for Eliseo Vargas, this following Friday’s action by the Sala Tercera de la Corte Suprema de Justicia that rejected the last appeal that would have kept Eliseo Vargas out of jail.

The former CCSS head and pediatrician will now be serving out a four year sentence set on May 21, 2012, on five counts of embezzlement. But, his time in prison could be longer. There is the possibility that Eliseo Vargas could have another three years added to his stay with respect to the embezzlement conviction of May 2011, in the Caja-Fischel case.

[quote]An ex President, high ranking public officers and distinguished businessmen are sentenced for corruption and peculation (sic) in Costa Rica.When justifying the sentence, the judges told of how a group of powerful politicians from a prominent party conformed a criminal gang which developed an entire operation using assets of the State, among them Legislative Assembly and Social Security, to make money with illegal commissions paid by foreign and domestic dishonest businessmen. From Centralamericadata.com, Oct. 2009[/quote]

Like every other convicted prisoner, Eliseo Vargas will have to do some time in San José infamous and extremely overcrowded San Sebastián prison, in San José, ironically only a few blocks south of the CCSS offices where Vargas was once the head honcho.

According to the Ministerio de Justicia, Eliseo Vargas could be in San Sebastián up to 15 days, the processing time before he can be transferred to the minimum security section of the San Carlos prison.

Eliseo Vargas was among the first implicated in the massive corruption scandal. In June 2004 La Nación uncovered that he was living in a luxurious hours in the post community of Lindora, in Santana, that had been purchased by a firm linked to Corporación Fischel, the drug and medical equipment supplier. (The house today still sits vacant and not been able to be sold by judicial officials).

Investigators dug deep, and Vargas and executives of the Fischel were quickly accused of accepting  US$9 million in commissions, when in 2001 Finland’s government granted the CCSS a soft loan of $39.5 million to buy medical equipment. The Finnish government guaranteed the loan, plus promising to pay 12 million Euros of interest on it. According to the Finnish accusation, the Instrumentarium Medko Medical company (now owned by General Electric) advanced the Corporacion Fischel (also currently under different management) US$8.7 million.

Calderón (1990-1994) was accused of being the “mastermind” behind the scheme to defraud the CCSS. In an attempt to avoid going to jail, Vargas began cooperating with the Attorney General’s office.

In 2009, crusading prosecutor Francisco Dall’Anese (later to become Attorney General) conducted the prosecution in Costa Rican court of Calderon and five other co-defendants, the latter mostly former CCSS officials. Calderon was sentenced to five years in prison on two counts of corruption, thus gaining the dubious distinction of being the first former president to receive prison time in court. Gloria Bejarano (Calderón’s wife) was a part of the trial, but on the civil side. (In Costa Rica defendants may be tried simultaneously for both civil and criminal offenses.) The Goicoechea court ruled to reimburse the government US$79,000.

But the timing is surprising. Costa Rica’s justice system, famous for its agonizing slowness, put on trial and sentenced all the above defendants happed three years ago and even went through appeal.