Get out the umbrella and galoshes for it will be a wet week says the national weather service, the Instituto Meteorológico Nacional (IMN).

Monday afternoon was typical of what can be expected for the rest of the week. According to meteorologist Rebeca Mora, a decreae in the winds and increased humidity is behind the afternoon rains that come down on the Central Valley on Monday and expected to continue for the days ahead.

Monday afternoon’s showers – as compared to the typical rain of the rainy season – was a surprise to most and the source of increased traffic congestion.

The skies over the Central Valley went dark in the early afternoon hours, a little drizzle could be felt at times, typical of what one could expect during the months of May to November.

But, hey we are still in February and “it’s not going to rain”. That thinking caught many wet.

Although the rains were light, it was enough to raise the grime from the road surfaces making them slick. It was also enough to water the grass and plants that have been in dire need for water.

A satellite image of Monday afternoon skies by the IMN: 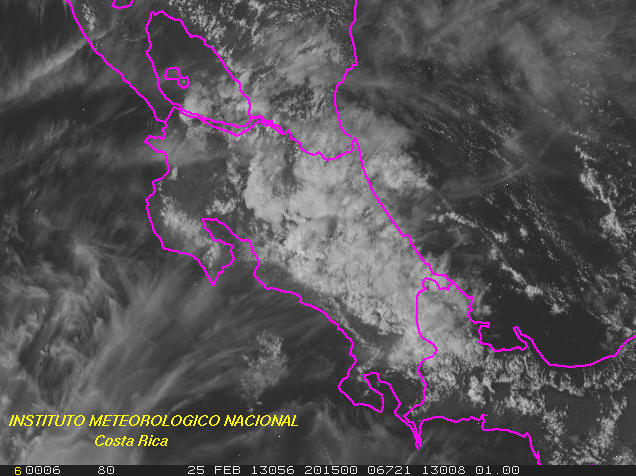