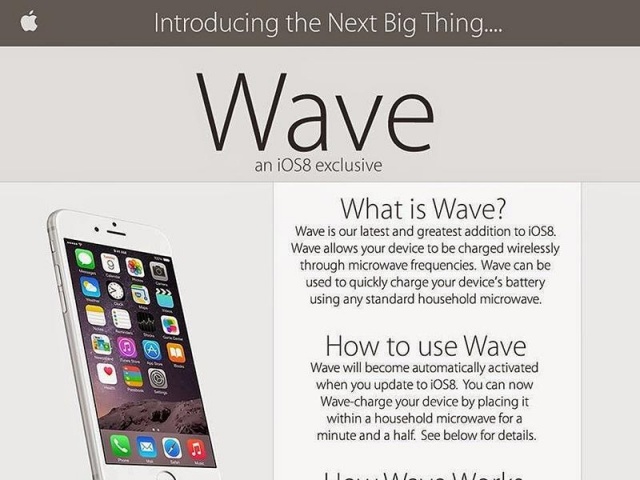 AFTERBIZLIFE – Remember the spoof adverts that tried to suggest that iOS 7 would make your iPhone waterproof? Well the same bunch of tricksters from the 4chan message boards are back, and this time they’re trying to get you to microwave your iPhone 6. Just in case you were tempted to try it: no, you cannot charge your brand new phone by putting it in the microwave.

The online pranksters have put together an official-looking product page that describes Apple Wave, a revolutionary quick-charge process that comes as part of the iOS 8 upgrade. “Wave is our latest and greatest addition to iOS 8,” says the faked page. “Wave-charge your device by placing it within a household microwave for a minute and a half.”

The advert has been doing the rounds on social media and may have caught one or two people unawares; though we haven’t heard of anyone actually frying their hardware yet. Consider this fair warning that this brand new iOS 8 feature is in fact completely made up.

“iOS 8 contains new drivers that interface with your device’s radio-baseband allowing it to synchronize with microwave frequencies and use them to recharge your battery,” runs the advert. It concludes with a warning not to “wave-charge” for longer than 300 seconds, but if you’ve got that far then you’ll probably have already realized your mistake.

Q TRAVEL (Hola.com) There is nothing better when traveling...
Trends