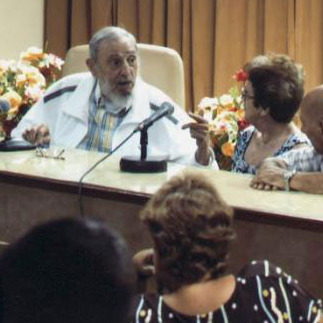 The photos showing the leader alive and well came out three days after his younger brother and current president, Raul Castro, announced a formal agreement with the United States on restoring diplomatic relations after a break of 54 years.

It was Fidel Castro’s first reported public appearance in three months. That previous encounter, with visiting Venezuelan students, was his first in more than a year.

Official media showed images of Castro seated at a panel in an auditorium at a research institute belonging to the Food Industry Ministry. He wore a white wind-breaker, a plaid shirt and gray pants.

Fidel Castro stepped down due to illness provisionally in 2006 and definitively in 2008, handing off to Raul, 84. Fidel writes an occasional newspaper column and receives dignitaries at home. Whether he maintains a role in policy-making is unknown.