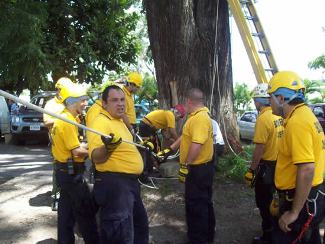 The mission of the Fire Department in Costa Rica is to protect life in situations when property or the environment are threatened by fire or other emergencies. In many occasions, the protection of life includes saving animals from burning flames or from dangerous situations. In two recent instances, firefighters in Costa Rica have filled the life of families with joy and relief by rescuing household pets.

Mangui the Cat Has But Four (Or Six) Lives Remaining

In the Los Angeles neighborhood of Cartago, there is a curious and playful cat that has been close to losing its life in three different times. Mangui is a male adult cat; he is a companion to the family of Pablo Zuniga, and he has been close the meeting the feline grim reaper on the following occasions:

Like many other household cats in Costa Rica, Mangui spends quite a bit of time exploring the outdoors and eliminating rodents and snakes from the neighborhoods they live in. Still, most cats check in once or twice in a 48 hour period. When the Zuniga family noticed that Mangui was missing, they began to search for him. They finally figured out that he had entered the ceiling of the neighbor’s house, but there was no way to get him out.

Firefighters arrived to liberate Mangui from his ordeal. They are trained to get into confined spaces and figure their way out, and that is how they got the cat out from under the hot tin roof. It is important to note that the colloquial belief of a cat having nine lives applies to English-speaking cultures, whereas in Latin America they only have seven.

In Bajo Piuses de Tibas, a working-class neighborhood north of San Jose, an electrical fire quickly engulfed an add-on shack that almost claimed the life of a canine companion animal.

Yamileth Diaz heard a loud crack, but she was not aware of fire until she saw black smoke billowing out of the guest house. She actually attempted to put out some the flames, which were quickly spreading. She called the Fire Department when she realized that it was a significant fire.

Fire Captain William Hernandez explained that initial reports indicated that Mrs. Diaz may have been trapped because she went back to get Chester, her brother’s dog. Firefighters rushed in and evacuated the woman, who already had Chester in her arms. They completely extinguished the fire in just 11 minutes.

Firefighters in Costa Rica value animal life and certainly understand the deep connection between humans and their pet companions. Rescue K-9 officers are part of the firefighting crews in Costa Rica, and just about every fire department has a resident pet.