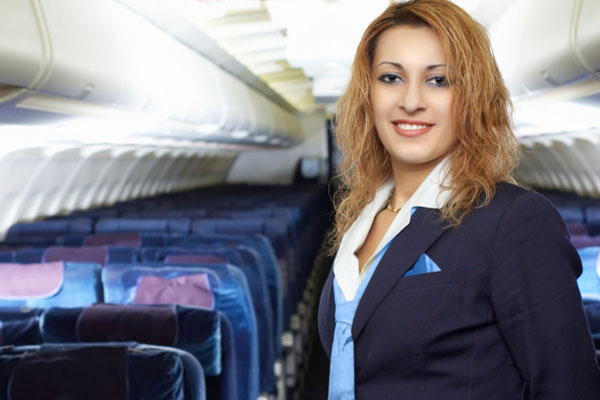 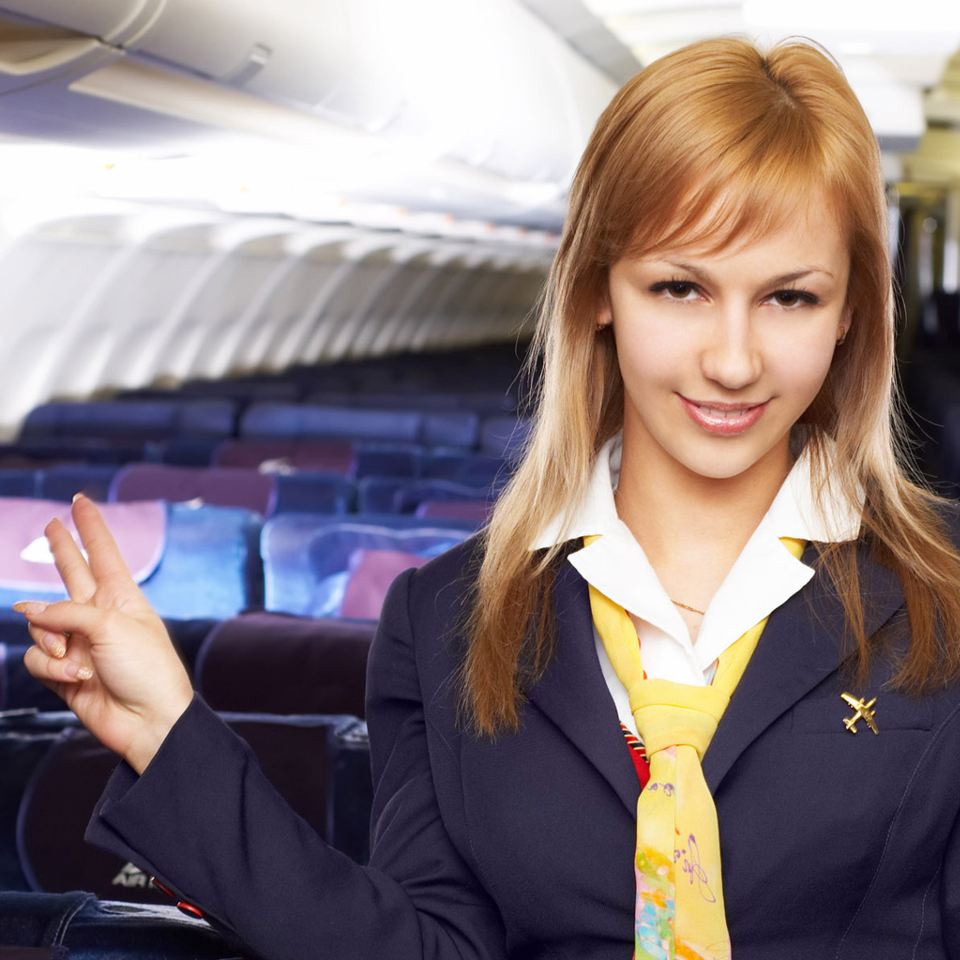 AFTERBIZLIFE (Wakeup-World) — A group of flight attendants as well as investigations by the EPA have exposed shocking revelations regarding the health dangers in the skies, courtesy of most major airlines.

This information should make you think twice before having that cup of coffee, using their pillows, headsets or even washing your hands in the lavatory.
How to Protect Your Health on Airplanes

1. Don’t Consume Any Water That Did Not Come From a Bottle

Whatever you do, do not drink the water in the lav. They sanitize the water tank at selected maintenance intervals, however parasites build tolerances to the cleaners. And that thunderous volcanic toilet flush doesn’t exactly help the situation, spraying water and releasing potential germs into the air every which way. The CDC cited the lavatory as a major danger area for the spread of disease during epidemics. Use a paper towel to close the toilet lid before flushing — and then leave without washing your hands. You’ll come away cleaner if you skip the sink altogether.

Do not EVER drink water on an aircraft that did not come from a bottle. Don’t even TOUCH IT. The hoses that supply the airplanes water is filled with slime. The ports to purge lavatory feces and refill the aircraft with potable water are within feet from each other, and are sometimes serviced all at once by the same person. A random sampling of 327 unnamed domestic and international aircraft caused a stir in 2004 when some water samples tested positive for E. coli, one strain of which is the leading cause of food poisoning. 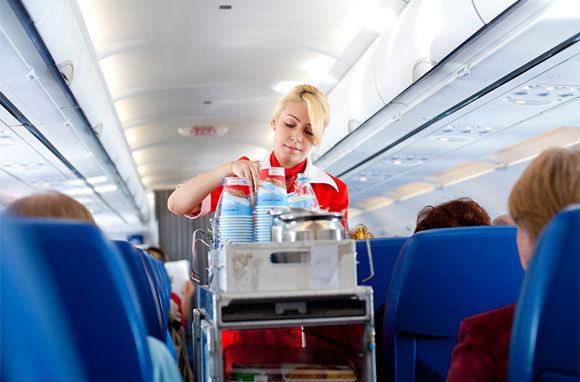 Much like the drinking water, that used for making coffee, tea, etc., should NEVER be consumed. The holding tanks in these sometimes 60 year old planes are never cleaned. They have accumulated so much greenish grime on the walls that in some places it can be inches thick. This one is very well known by most airline employees.

Reaching into that pocket is akin to putting your hand in someone else’s purse and rummaging among their used tissues and gum wrappers.

Toenail clippings and mushy old French fries are even nastier surprises that have been found in seat pockets. Consider that cold and influenza viruses can survive for hours on fabric and tissues, and even longer (up to 48 hours) on nonporous surfaces like plastic and metal — and you realize that you might pick up more than that glossy flight magazine when you reach inside.

Bring a small, easily accessible carry-on bag so that you can avoid stashing things in the seat pocket.

4. Airplane Meals are a Threat to Your Health

In-flight meals have long had a bad reputation for consisting of bland, barely identifiable dishes. They are are filled with harmful preservatives, artificial sweeteners, colors, genetically modified organisms (GMO), factory farmed meat filled with toxins, in addition to vegetables filled with pesticides, herbicides, and fungicides. 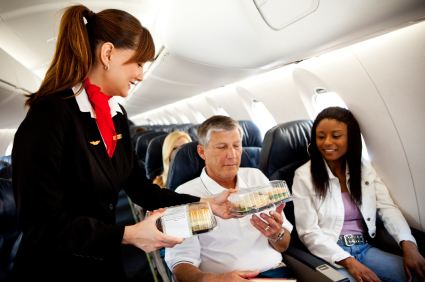 Then, in 2009, airline meals made headlines when FDA inspections of the Denver location of LSG Sky Chefs — the world’s largest airplane caterer with clients including American Airlines, Delta and United — found the kitchens crawling with roaches too numerous to count and employees handling the food with bare hands or unwashed gloves. Test samples from the food preparation area also found traces of Listeria monocytogenes, which can cause gastrointestinal illness and meningitis, as well as cervical infection in pregnant women. Your likelihood of contracting illness from the microbe is very low, though it should be noted that one fifth of the 2,500 annual cases are fatal.

Do yourself a favor and do not eat any airplane meals if you don’t have to. Bring your own food and as many snacks as necessary to keep you well nourished and energetic. Dried fruits, bars, nuts, dehydrated chips are great options. Even fasting has been shown to greatly improve mood and jet-lag after crossing time zones. Anything is better than an airplane meal. 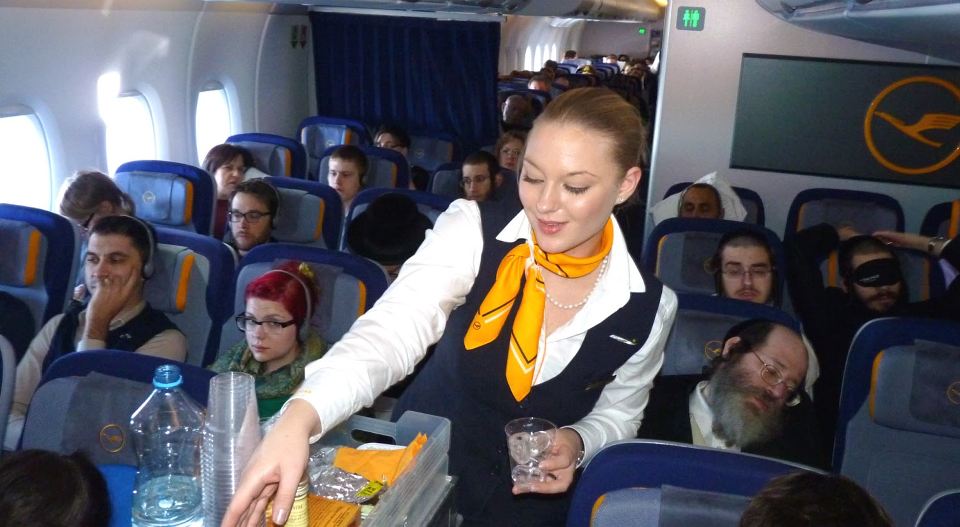 5. Blankets and Pillows are Rarely Cleaned

Blankets and pillows simply get refolded and stuffed back in the bins between flights. Fresh ones are only brought in sometimes on an originating first flight in the morning in a provisioning city, but not always. More often than not, you’re snuggling with a blanket and pillow that have likely been used by many drowsy, drooling passengers before you. Unless visibly soiled, pillows and blankets are often reissued because of the frequency of flights.

A 2007 investigation by The Wall Street Journal revealed that airlines cleaned their blankets every five to 30 days. And don’t assume your blanket is new just because it’s wrapped in plastic. The Union of Needletrades, Industrial, and Textile Employees made a big stink in 2000 when it accused Royal Airline Laundry — which supplies pillows and blankets to clients like American, United and US Airways — of repackaging pillows and blankets without cleaning them properly. Its research found blankets with traces of Pseudomonas paucimobilis, known for causing lung and eye infections, and pillowcases with Aspergillus niger, which can lead to pneumonia and gastrointestinal bleeding.

In the years since, airlines like Southwest and Alaska Airlines have removed pillows and blankets completely, while JetBlue, US Airways and American now charge for them.

If you have ever spread your peanuts on your tray and eaten, or simply touched your tray at all, you have more than likely ingested baby poo. Flight attendants have witnessed more dirty diapers laid out on these trays than food. Again, they are rarely if ever sanitized.

Research confirms that the handy tray table is a petri dish for all kinds of health hazards, including the superbug Methicillin-resistant Staphylococcus Aureus (MRSA), which is often fatal once contracted. It kills an estimated 20,000 Americans annually.

In 2007, University of Arizona researcher Jonathan Sexton tested tray tables from three major airliners, and an alarming 60 percent tested positive for the superbug. That’s quite a revelation considering only 11 percent of his samples from the New York subway found traces of the bug.
Try to bring a natural lemon spray and oregano oil to clean off your tray table before and after use, and never eat directly off the surface. Himalayan oregano has strong antibacterial properties that can even kill the superbug MRSA. Be sure to protect any cuts with Band-Aids — the most common way of contracting an MRSA infection is through open skin.

7. Wrapped Headphones are Not New

We’ve all been given the nicely wrapped headphones that look new and convincing enough, but they’re not. The headsets that are provided are not new, despite being wrapped up. They are taken off the flight, “cleaned”, perhaps only to some extent, and then packaged again.

8. The Truth About Flying with Your Pets

One thing that cannot be stressed enough is how your pets are treated. While your airline will take the best possible actions, some things cannot be avoided, like the noise on the ramp. Aircraft fuelers have reported not being able to stand out there without ear protection, so imagine your pet sitting out there on the ramp waiting to be loaded onto the plane being exposed to the same amount of noise. The hearing of dogs and cats can be damaged on just one flight. Please think twice before flying your pets.

Article from Afterbizlife, reposted with permission.

- Advertisement -
Paying the bills
Previous articleTake a 360° Virtual Tour of Costa Rica!
Next articleBullying Cause of 21 Suicides in Costa Rica