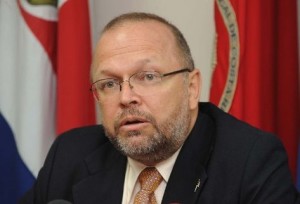 An apparent prank cost Costa Rica’s former Attorney General, Francisco Dall’Anese, to miss his flight to El Salvador and forced to buy another ticket, after telling an employee at the Juan Santamaría (San José) airport that he was carrying a stick of dynamite in his luggage.

It was last Saturday when, airport police called in agents of the Dirección de Inteligencia y Seguridad Nacional (DIS) – Costa Rica’s equivalent of the Secret Service – to stop the former Attorney General from boarding his flight, her for extensive questioning and checking of his luggage for explosive.

It was all a prank if appears.

It is not clear what motivated Dall’Anese to answer the in that way when he was asked the routine question asked all passengers if he was carrying a bomb, explosives, firearms, etc.

Glen Pacheco, head of airport security, confirmed the occurrence to the DIARIO EXTRA. “We delayed the flight, and handed over the protocol to the DIS”, Pacheco told the daily.

After several hours of waiting around and the confusion around the airport, the Dall’Anese found himself grounded, as the airline, Avianca, cancelled his ticket. The former Attorney General had to then purchase a ticket on Copa Airlines to ultimately reach his destination.

Dall’Anese has not spoken to the press to explain his side of the story or what motivated this strange and unusual reaction from the person who was once the top law enforcement agent in the country.

QCOSTARICA - Ever wonder why your surfing on the Internet slows down, to even a crawl, mainly in the evenings? This is due to...
Business