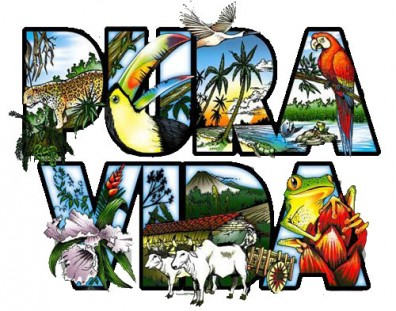 When Fabiana Granados was crowned Miss Costa Rica 2013 over the weekend, hundreds of thousands of Ticos tuned in to Teletica for the pageant’s broadcast on Teletica clearly heard her exclaim in surprise, and in English: Oh My God!

Fabiana Granados’ choice of an English expression to express her elation and surprise at being crowned Queen of all Ticos caused a social media storm in Costa Rica, with netizens shaking their heads and sadly opining that either:

Spanish is sadly losing ground to English in Costa Rica

Fabiana is a fresa

“Fresa” is part of the Costa Rican slang vernacular and it is used to describe people who attempt to flaunt their socioeconomic status by peppering English in their everyday speech; particularly with terms that are associated with teenspeak. Readers who often travel by bus to Heredia, Santa Ana, San Pedro, Rohrmoser, and other areas where English-language call centres are located, will invariably hear Ticos coming off their shifts speaking English or Spanglish to each other; it may be unfair to categorize these call center employees as fresas since they may only be practicing their second language, but you get the idea.

Our new Miss Costa Rica hails from Guanacaste, a province that has seen a great influx of English-speaking expats over the last few years and where English is becoming more common as a result. It is not unreasonable to think that Fabiana has been exposed to a fair amount of English growing up. In an interview with La Nacion, Miss Granados explained that, while she is bilingual, she barely uses that expression in English; she added that she exclaimed “Oh my God!” because that was what she felt in her heart at the moment. To Fabiana’s credit, she does not come across as fresa or unpleasant; in fact, she comes across as humble and down to earth.

While the topic of why Fabiana used “Oh my God!” is the subject of dubious analysis, jokes and general mocking in social media circles, there are three Ticos who are not smiling at all. They are a pair of linguists and a writer who form part of Alajuela’s Committee in Defense of the Spanish Language, otherwise known as the “patrulla defensora del idioma” (grammar police).

Unlike members of the global online grammar police, who surreptitiously patrol social Internet forums and are essentially self-appointed in the interest of making the Internet a more legible place, Marcos Bravo Castro, Flora Jara Arroyo and Ani Brenes Herrera actually walk the beat of the streets in the central canton of Alajuela; they actively look for grievous affronts against orthographical and grammatical errors seen in banners, signs, posters, flyers, and other likely places.

The three members of the grammar police are actually upholding the law in Costa Rica. In 1996, the National Assembly approved Public Law Number 7623, In Defense of the Spanish Language and Native Languages of Costa Rica. The preamble of this law clearly states that advertising materials must be correctly written in Spanish or the indigenous languages of Costa Rica, as well as other media such as government documents and tourism informational materials.

The grammar police of Alajuela, who do not receive compensation for their arduous work, issue verbal warnings prior to writing infraction tickets that call for corrective action. This is pretty much the extent of their work, since the law does not call for fines or other punitive measures. They also have a thrice-daily radio show that airs on Radio Alajuela, 1120 on the AM dial, which deals with matters pertinent to the English language.

These linguistic volunteers certainly have their work cut out for them: A recent sculpture erected right across from the Juan Santamaria park reads “alajuela,” without regard to proper capitalization. Just a few steps away, a street sign reads “Boulevard Carlos Luis Fallas,” named after one of Costa Rica’s foremost literary figures. Boulevard is a French word; the correct usage in Spanish would be “bulevar,” which is a Gallicism accepted by the Royal Spanish Academy.

Although the Spanish language is currently growing faster than English in many parts of the world, the Bard’s language is having a significant impact in Costa Rica. Just like in Mexico and many parts of the United States, the influence of English is leading to greater acceptance of Spanglish and its cringe-worthy idiomatic expressions. One only needs to spend some time watching television networks such as MTV Tr3s, NBC Mun2 and Telemundo-YouTube’s Mia Mundo to understand that Spanglish is on its way to becoming a mainstay.

Much to the dismay of Alajuela’s grammar police and others ready to defend the integrity of Spanish, the English imprint in Costa Rica can trace its beginning a long time ago. Spanish language purists can blame the prevalence of pop culture, globalization and the growth of the Internet for influencing Ticos into adapting English expressions.

Miss Costa Rica is hardly the only Tica using “Oh my God!” in their everyday speech. Ticos are avid users of online social networks such as Facebook; to this end, it is not rare to see the Internet abbreviation OMG in status updates and comments. The pre-Internet slang term “tuanis,” for example, is an unofficial Anglicism for “too nice.” The expression “todo bien” is a near-direct translation of the North American idiom “it’s all good,” which young Ticos have taken to use these days. Ticos who study English as a Second Language are usually surprised to learn that the word “catering” is not pronounced like the name Katherine without the letter h. There’s also the word “canopy” that describes the activity of using an intricate network of ropes and zip lines to appreciate the beauty of Costa Rica’s diverse forests.

Adding to the growth of English and Spanglish are Generation X Ticos who grew up with Channel 19 on UHF during the mid-to-late 80s. A previous article on The Costa Rica Star described this generational event:

“Channel 19 one day appeared on the free airwaves of Costa Rica; it was essentially a WGN broadcast from Chicago during the daytime, and sometimes HBO or MTV at night. Just like Cable Color, it was 100 percent in English, and the channel introduced young Ticos to a world of programming that included GI Joe, the Transformers, Soul Train, and the Chicago Cubs with Ryan Sandberg on second base.”

On that article, you can also read about the displeasure by some cable and satellite TV subscribers who complain about Cabletica’s recent move to replace original English programming on some channels with dubbed movies and series. With cable and satellite subscribers on the rise, providers in Costa Rica are increasing their Spanish and Spanglish programming options; however, there is still plenty of English-language content for Ticos to enjoy –such as this online newspaper. This preference for consuming English-language content is a more influential factor than the number of expats from the United States, Canada and other English-speaking nations.

We should not be afraid of the rise of English and Spanish in Costa Rica. It is preposterous to think that Spanish will one day cease to be spoken in Costa Rica, and we have Panama and Puerto Rico as evidence that this will not happen. It’s not like that university in Italy that switched to an all-English curriculum. Bilingualism and code-switching are also on the rise in Costa Rica, and the adaptation of English language words and expressions by Ticos actually conforms to Noam Chomsky’s linguistic theories on generative grammar; this, in the end, is a good thing.