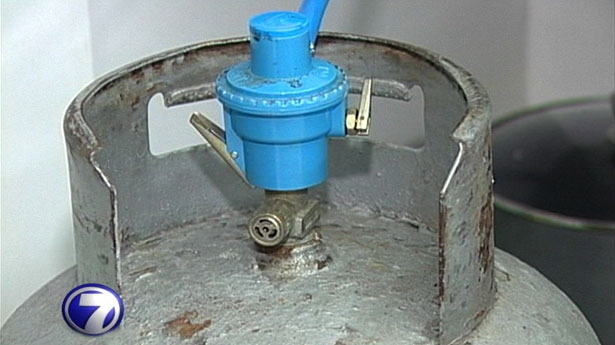 The cheap pin type regulator shown in the photo above is actually referred to as the “Central American type”, considered unsafe in the rest of the world.  See our report “Cooking Dangerously”.

The Ministry of Environment (MINAE) has ordered bottlers of compressed gas cylinders to change the valves as a condition of renewing their operating permits.

The MINAE said bottlers have three months to make the change which has to be completed before the end of June.

Tomza is the first gas company to already start making the change to one thousand cylinders and says it has purchased two thousand new ones.

Gas Nacional Zeta says it has not started the change as it has not yet received the directive from the MINAE, spelling out the changes being asked. MINAE minister, Rene Castro, says the company has been officially notified.

A study by the Cuerpo de Bomberos de Costa Rica (Fire Department) indicates that nine out of ten emergencies involving gas in the past year were caused by faulty valves.

Bomberos reports responding to 2,091 cases so far this year.

In addition to the valve replacement, gas bottlers are required to dispose of cylinders older than 10 years.

- Advertisement -
Paying the bills
Previous articleDon’t Forget the Umbrella!
Next article“Mordida” To Cost Tránsito His Job