It was not until Oct. 18, 1813, that what was then referred to as”La Boca de la Monte” became officially the incorporated town of “Villa Nueva de San José.” Life was slow then, the pace of an ox cart, and people were not impatient with long names. Now, positively hasty, everyone refers to it with the nickname for José, “Chepe.” 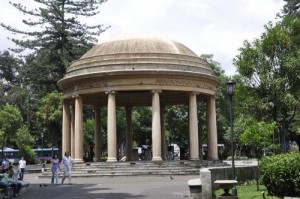 It also was closer to nature — at least to farming — the suburbs merely gatherings of houses to punctuate the green surroundings of trees and, later, coffee plantations. After its founding at the urging of Fr. Florencio de Castillo, it would have to wait a decade before it wrested the title of nation’s capital from Cartago.

Thus it was to remain until well into the 20th century — the coffee plantations barely stopped at where the Legislative Assembly (congress) building is today on “Cuesta Moras” (Blackberry Hill.) But at the turn of the 20th century it was lit by electricity, at least for a few blocks, generated by a now-disappeared river that once bubbled through the downtown area.

One of the early tourists, the Englishman John Hale, wrote in 1825: “Villanueva or San Jose capital of the province, is in an extensive valley or high land and its site is one of the most lovely in the world. In all directions, the suburbs of this city are enchanting and most particularly La Sabana (or common pastures) donated by don Manuel Chapui, the late clergyman.”

In a eulogistic article in La Nacion, historian Florencia Quesada noted that at one time of year, the fragrance of the coffee blossoms filled the city air, only to be replaced later in the 20th century by another odor. She is too delicate to name the odor but we will — hydrocarbon fumes from hundreds of thousands of vehclles.

(The Friday edition of the newspaper La Nacion carries a map of Costa Rica in 1787, looking strangely nude without Guanacaste province whose population in the next century was to opt to become a part of this country, at situation that displeases Nicaraguan President Daniel Ortega to this day.)

The old city of San Jose took a great leap forward in 1830 with the first paving of streets with stone, the first street lights using gas, an embryo of a police force, a marketplace, city cleaning (still a battle with litter) and the first places for fun such as billiard parlors.

But San Jose was recognised as a town much before its incorporation — the Costa Rican Geographical and Historic Academy set in 1951 the date as 1737. But the time is difficult to assess because in that era the country was a province of Spain, governed out of Guatemala. Records are vague or non-existent.

Indeed, before 1750 there was no push to form villages and cities, much easier to govern than scattered houses. After the middle of the 19th century, a concerted effort was made. (Probably, a municipal police force would have found little to do because people in the poor province had enough to do just to scratch out a living.)

But it was not until 1776 (as the United States began to break away from the British Crown) that cleric Manuel Antonio Chapui de Torres (1713-83) gave the order to build an adobe church with a central plaza in front of it (in the Spanish model) that the village of San Jose began to look  like a town.

Naturally, it was not long before merchants hastened to build on the edges of the plaza. But ironically the first public building was a tobacco factory in 1782, whose warehouses became the first government offices and seat of the first Chiefs of State after the independence in 1821. The first La Merced church was built alongside.

But real government buildings did not begin springing up until the 10-year government of Juan Rafael Mora (1849-59) along with the declaration of a republican style of government. Symbol of that was the Palacio Nacional, completed in 1856 where Banco Central is now.

It was in 1833 that one of the most colorful — and ill conceived — government mechanisms ever devised decreed that the capital status would revolve in four-year sequence among Alajuela, Heredia, Cartago and San Jose. It was only two years later that Chief of State Braulio Carrillo brought sanity to the arrangement, sparking a brief war won by San Jose’s supporters.

Carrillo had the idea of establishing the capital in San Juan de Murcielago (what is now San Juan de Tibas) but this was never done. Carrillo’s successor, Manuel Aguilar, in 1838 returned the governing seat to San Jose. Carrillo was returned to office in a coup but never brought up a rotating capital again.

Beginning in the 1830s, the era of the coffee barons began in a big way with many fine homes being established in San Jose, a few of which are still to be seen in Barrio Amon. It was at the end of this gilded era, at the turn of the 20th century, that the coffee barons financed the National Theater, last of the grand opera buildings of its type and the first to be wired from the ground up for electricity.

Today, San Jose maintains its early momentum as the pre-eminent city in the country and queen of the Grand Metropolitan Area — home of 60% of the population, 85% of the industry and (unfortunately) 70% of the cars in Costa Rica.

Q REPORTS (DW) In Peru, the left-wing village school teacher Pedro Castillo has in all probability been elected the new president. The fact that...
Politics