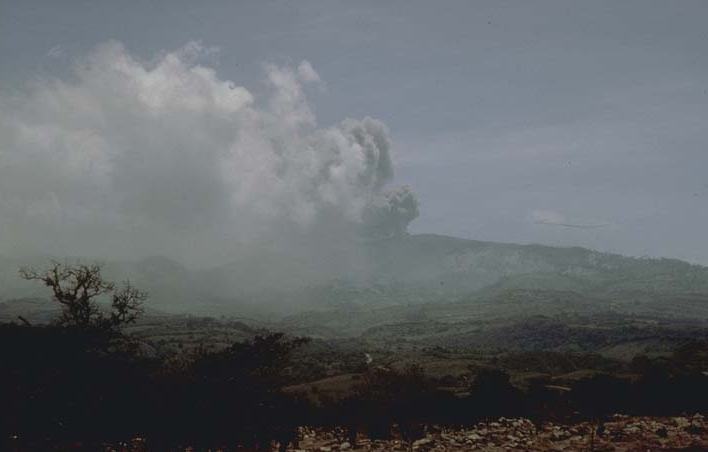 Compared to the geologic timescales most volcanoes operate on, Costa Rica’s volcano Irazú has something of a short fuse. A new study, led by Columbia University’s Lamont-Doherty Earth Observatory, suggests the 1960′s eruption of Costa Rica’s largest stratovolcano was triggered by magma rising from the mantle over a few short months, rather than thousands of years or more, as many scientists have thought.

The new findings suggest that deep, hot magma can set off an eruption quickly, potentially providing researchers with an extra tool for detecting an oncoming volcanic disaster.

“If we had had seismic instruments in the area at the time we could have seen these deep magmas coming,” said Philipp Ruprecht, a volcanologist at Lamont-Doherty. “We could have had an early warning of months, instead of days or weeks.”

The Irazú towers more than 10,000 feet and covers almost 200 square miles, erupting approximately every 20 years with varying degrees of damage. The 1963 eruption lasted two years, killing 20 people, and burying hundreds of homes in mud and ash. The most recent eruption, in 1994, did almost no damage.

The stratovolcano is located on the Pacific Ring of Fire. This is an area where oceanic crust is slowly sinking beneath the continents, producing some of the world’s most extreme volcanic activity. In the past, researchers believed that the mantle magma feeding these eruptions rose and lingered for long periods of time in a mixing chamber several miles below the volcano. In the case of Irazú, though, this magma may travel directly from the upper mantle, covering more than 20 miles in just a few months.

“There has to be a conduit from the mantle to the magma chamber,” said Terry Plank, the co-author of the new study, in a news release. “We like to call it the highway from hell.”

In order to learn a little bit more about this volcano, the researchers examined crystals of the mineral, olivine. These samples were found in the ashes of Irazú’s 1963 eruption. The crystals contained spikes of nickel. These particular spikes revealed that the erupted magma was so fresh that the nickel had not had a chance to diffuse. This showed that, in fact, it’s possible for magma to rise from the mantle to the surface extremely rapidly.

The findings could allow researchers to better predict volcanic eruptions. These forecasts are crucial for potentially saving lives. In fact, a mass evacuation in 2010 near Mount Merapi saved as many as 20,000 lives.

It’s likely that Irazú possesses a much shorter timespan for an eruption that both scientists and officials need to worry about. Seismographs could be placed along the flanks of volcanoes to help detect deep earthquakes, warning of an imminent eruption. For now, though, researchers and continuing to examine these volcanoes, discovering a little bit more about fast-rising magma.

Crystals of the mineral olivine provide the evidence for their findings. The crystals that separated from the ashes of Irazu’s 1963-1965 eruption were collected on a 2010 expedition to the volcano. Crystals are formed as the magma rising from the mantle cools. These crystals preserve the conditions in which they formed. Irazu’s crystals surprised the researchers by revealing spikes of nickel, a trace element found in the mantle. The presence of nickel in the crystals told the team some of the magma from Irazu was so fresh that the nickel had not had time to diffuse.

“The study provides one more piece of evidence that it’s possible to get magma from the mantle to the surface in very short order,” said John Pallister, who heads the US Geological Survey (USGS) Volcano Disaster Assistance Program in Vancouver, Wash. “It tells us there’s a potentially shorter time span we need to worry about.”

Other large events have been linked to deep, fast-rising magma. For example, Mount Pinatubo in the Philippines erupted in 1991, spewing so much gas and ash into the atmosphere that it cooled Earth’s climate. For weeks before the eruption, seismographs recorded hundreds of deep earthquakes that USGS geologist Randall White later attributed to magma rising from the mantle-crust boundary.

In another large event, a chain of eruptions at Iceland’s Eyjafjallajokull volcano in 2010 caused widespread flight cancellations across Europe. The eruptions also indicated some magma came from down deep. A 2012 study by University of Cambridge researcher Jon Tarasewicz examined small earthquakes set off by the eruptions, which suggested the magma in Eyjafjallajokull’s last two explosions originated 12 miles and 15 miles below the surface.

Before an eruption, volcanoes give off many warning signs. These signs include the cones bulging with magma, carbon dioxide and sulfur vent into the air, and enough heat is thrown off that satellites can detect their changing temperature. Tremors and other rumblings below ground can be detected by seismographs. In late October 2010, Indonesia’s Mount Merapi came to life, spurring officials to lead a mass evacuation credited with saving as many as 20,000 lives.

Predicting volcanic eruptions is not an exact science, however. It is unclear, even with more seismographs placed along the flanks of volcanoes to detect deep earthquakes, if scientists would be able to translate the rumblings into a projected eruption date. The biggest problem is many apparent warning signs do not lead to an eruption, putting officials in a bind over whether to evacuate nearby residents.

“[Several months] leaves a lot of room for error,” said Erik Klemetti, a volcanologist at Denison University who writes the “Eruptions” blog for Wired magazine. “In volcanic hazards you have very few shots to get people to leave.”

By looking for patterns between eruptions and the earthquakes that precede them, scientists may be able to narrow the window. The new study provides a real-world constraint for modeling how fast magma travels to the surface, as well. “If this interpretation is correct, you start having a speed limit that your models of magma transport have to catch,” said Tom Sisson, a USGS volcanologist based at Menlo Park, Calif.

In the ashes of arc volcanoes in Mexico, Siberia and the Cascades of the US Pacific Northwest, olivine minerals with nickel spikes similar to Irazu’s have been found, according to Lamont geochemist Susanne Straub. “It’s clearly not a local phenomenon,” she said.

The researchers are focusing their current efforts analyzing crystals from past volcanic eruptions in Alaska’s Aleutian Islands, Chile and Tonga. They are unsure, however, how many will bear Irazu’s fast-rising magma signature. “Some may be capable of producing highways from hell and some may not,” said Ruprecht.

QCOSTARICA - All viruses change over time. SARS-CoV-2 has...
Rico's Digest