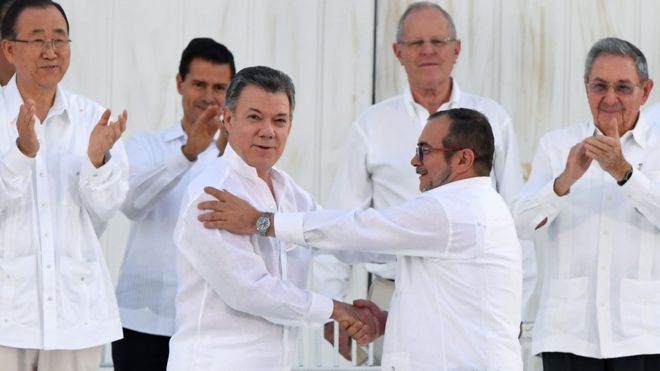 TODAY COLOMBIA – The Colombian government and left-wing Farc rebels have signed a historic agreement that formally brings an end to 52 years of civil war.

The rebel leader Timoleon Jimenez, known as Timochenko, apologised to “all the victims of the conflict” and was greeted by cheers and applause.

He said: “I would like to ask for forgiveness for all the pain that we have caused during this war.”

Guests dressed in white at the ceremony in Cartagena, to symbolize peace.

The UN Secretary-General, Ban Ki-Moon, and leaders of Latin American countries were among those present.

Timochenko said the Farc, a group founded as the armed wing of the Communist Party in 1964, is leaving armed conflict behind and moving in to peaceful politics.

“No-one should doubt that we are moving into politics without arms,” he said.

“Let us all be prepared to disarm our hearts.”

The president and Timochenko used a pen made from a bullet to sign the deal.

The deal must pass a referendum on Sunday before it can pass into law. Polls indicate the majority of Colombians will vote for it, although there has been some opposition, led by two ex-presidents.

Under the deal, the Farc will be relaunched as a political party. The entire peace agreement will be put to Colombian voters in a popular vote on 2 October.

It comes after four years of talks in Havana, Cuba, between President Santos and Timochenko.

About 2,500 foreign and local dignitaries witnessed the signing ceremony in the walled, colonial city of Cartagena.

The president said the decision to use a bullet-pen was intended to illustrate Colombia’s transition from a country of bullets into a country of “education and future”.

Correspondents say President Santos has risked his political future on the success of the peace deal.

“This step that your country is going to take is a giant step,”  Kerry said as he arrived in the country.

He praised the efforts of Santos to secure the deal and pledged US$390 million dollars to help implement it.

The U.S. is not yet ready to remove the Farc from its list of terrorist organizations, he said, but is prepared to review that sanction once the peace agreement is up and running.

However, only hours before the signing, the EU announced it was removing the Farc from its list.

“This decision will allow us to support the post-conflict program and will be of benefit to all Colombians,” EU foreign policy chief Federica Mogherini said on social media.

Correspondents say that although there is widespread hope that the deal may bring an end to the kidnappings and bloodshed that have blighted Colombia over five decades, it has also led to divisions in Latin America’s fourth-biggest economy.

Some are angry that it allows rebels to enter parliament without serving time in prison.

Farc rebels must now hand over weapons to the UN within 180 days.