An explosive device was detonated  Saturday at night in front of the Teletica (Televisora de Costa Rica), in La Sabana. 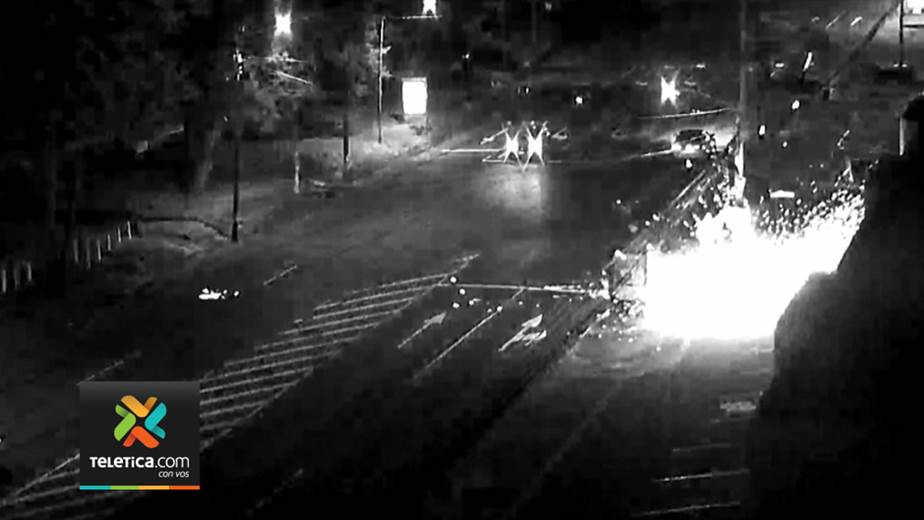 The incident occurred around 11:30 pm in the southwest corner of the building that houses the offices and television studios of Teletica channel 7 and CableTica, the television and internet cable provider.

Luckily there was no one walking by the area at that time of night and no vehicular traffic at the moment of the explosion.

The social networks fired up with comments, mostly against what many called a ‘cowardly’ act.

Hooligamism:
violent or rowdy behavior by young troublemakers, typically in a gang.

Terrorism:
the unlawful use of violence and intimidation, especially against civilians, in the pursuit of political aims.

However, the main sentiment of the comments strikes at the core of insecurity, many feeling this may be the start of a trend in a country.

While some commented that it was just a piece of glass (that was damaged) and blames the media for blowing up (no pun intended) the situation, “creating storm from a glass of water”.

The question being raised by many is that the intention is clear, that this act, that could lead to bigger and possible fatal acts, is to terrorize. “Costa Ricans should not justify it, much less approve these types of acts. That is absolutely irresponsible. In the end, it hurts us all.”

A study of the long history of revolutionary socialism leads us...
Read more

Venezuela, the country that was famous for its prosperity and oil...
Read more

Casino and baccarat is a term of love. Gambling is known to bring a lot of happiness provided your luck supports you, but how...
The Americas

Q REPORTS - U.S. President Joe Biden is expected to outline his vision of Washington's Latin America policy at the next Summit of the...
Heredia

QCOSTARICA - Despite losing their home entirely in December, a Heredia received electricity bills from the Heredia Public Service Company (ESPH) for January and...
Health

QCOSTARICA - The restrictions for travelers imposed by the United States, Canada, Mexico, France, Spain and the United Kingdom, six of the main sources...
Health

QCOSTARICA - A total of 24 travelers, so far, face problems with the law when discovered trying to leave Costa Rica, through the San...
Entertainment

The filming of the second season of the reality show “ReverseD” on the Discovery Channel officially began last Sunday, February 21, in Atenas, in...
Health