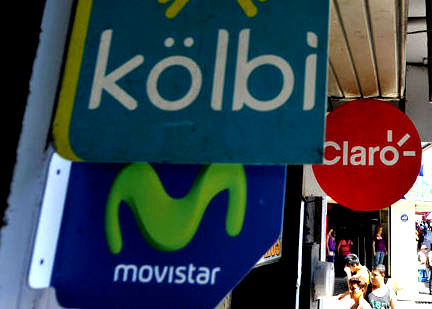 While in 2011, ICE had 90% of the telecom pie, their share at the end of 2013 had dropped to 61%, according to statistical information by the Superintendencia de Telecomunicaciones (Sutel).

Competition Gains Foothold. During this period of competition in the telecommunications market, we saw the arrival of Spain’s Telefonica (Movistar) and and Mexico’s America Movíl (Claro) go head-to-head with ICE for customers. Three years later, Movistar and Claro saw an average 25% increase quartely, meanwhile ICE continued to drop 3%.

Between November 2013 and May 2014, 83,947 mobile exercised their right to number portability, the vast majority were those who dropped ICE.

Source: Sutel
[/su_pullquote]But while ICE continued to lose relative market share it did, however, see an increase in customers growing from 3.1 million in 2010 when it had the monopoly  to 4.3 million in 2013.

Experts say the increase reflects an overall growth in the entire market, and despite its drop in market share the state telecom is still strong today even after several years of competition.

Trends. While in 2010 the number of  post-pay subscriptions was greater to pre-paid  (1.6 million to 1.5 million), in 2013 the number of overall post-pay customers had dropped 1.2 million.

According to the Sutel, Claro now has 1.3 million customers and Movistar with 1.27 million. Virtual mobile operators Tuyo Movil and Fullmovil have 44.000 and 150.000 customers, respectively.

QCOSTARICA - Osta Rica has been the epicenter of regional diplomacy in recent days. The successive visits of the Secretary of State of the...
Expat Focus

QCOSTARICA - For years, Tilarán has seen the transit of tourists heading towards Lake Arenal, the homonymous volcano and La Fortuna or towards Monteverde. At...
HQ