“Improvisados” At Palmares Not Insured

The death of 29 year old Melvin Valverde has brought to light that “improvisados” – amateurs who enter the bullring  – at the Palmares Festival are not covered by insurance.

The Instituto Nacional de Seguros (INS) – state insurer – confirmed that the festival organizers have a policy to cover workers, but the amateurs entering the ring are not deemed employees and thus are not covered under the policy.

“Nervousness and inexperience” is what did in Valverde, a father of 3, that entered the ring to follow through on a bet. His mother told the press that she tried dissuade her son who had never entered a bullring before, but to no avail. 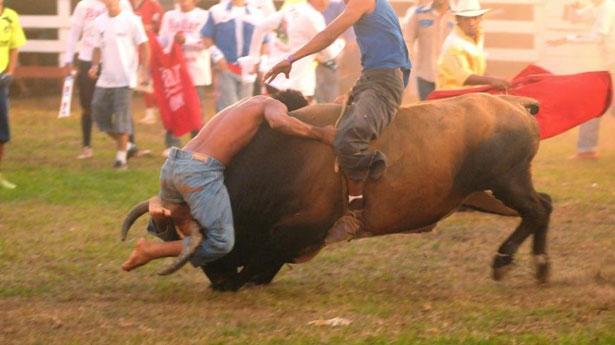 Unlike the organizers of the Zapote Fair that demand improvisados to purchase an insurance policy before being allowed in the ring, no such requirement is in place at Palmares.

QCOSTARICA - Loans in dollars, which had a great boom in 2000, began to slow down since 2016 and today, despite the fact that...
Dollar Exchange

QCOSTARICA  - Twenty eight Costa Rican's are lining up who want the position that Carlos Alvarado when he leaves office on May 8, 2022,...
Politics

QCOSTARICA - A 30-year-old man, who posed as a dentist, set up an office in the garage of a house in Siquirres, Limón, where...
Heredia

Q TRAVEL - Located in the extreme north of the Pacific coast, in front of the Santa Rosa National Park, in the sector of...
Guatemala

Q24N - Guatemala on Tuesday received 200,000 doses of the vaccine against covid-19 donated by India, which it will use to complete the immunization...
Health

QCOSTARICA - Five of the 82 cantons of Costa Rica register fewer than 10 active cases of covid-19 to this date, according to the...