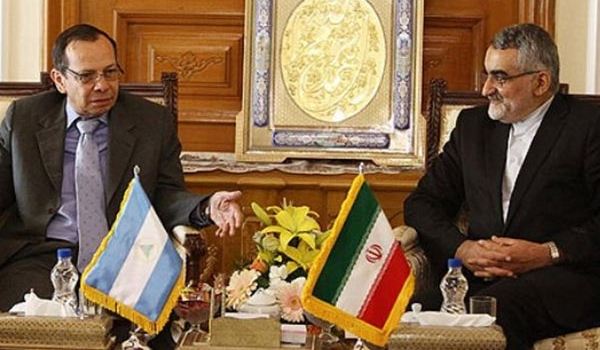 During the meeting, Tellez underlined support of his country for legitimate right of Iran to gain access to nuclear energy with peaceful goals, and criticized the warmongering policies of certain powers in the Middle East.

Boroujerdi, for his part, called imposed sanctions against Iran by the US government and its allies ‘illegal and unfair’ and underlined that the sanctions could not create obstacles on the way of Iran’s development, but in many cases, helped Iran to gain access to more progress.

Referring to terrorism in the Middle East, Boroujerdi said that Iran had already warned about activities of terrorist groups in the region, but certain countries ignored the warnings and supported the terrorist groups.

During the meeting, the two sides also discussed different ways to further consolidate relations and cooperation between Iran and Nicaragua.

Iran has been seeking to boost its ties with Latin American countries in recent years to the concern of the United States.

The strong and rapidly growing ties between Iran and Latin America have raised eyebrows in the US and its western allies since Tehran and Latin nations have forged an alliance against the imperialist and colonialist powers and are striving hard to reinvigorate their relations with the other independent countries which pursue a line of policy independent from the US.