It was a beautiful morning in Paradise: I got to have breakfast with 20 scarlet macaws! 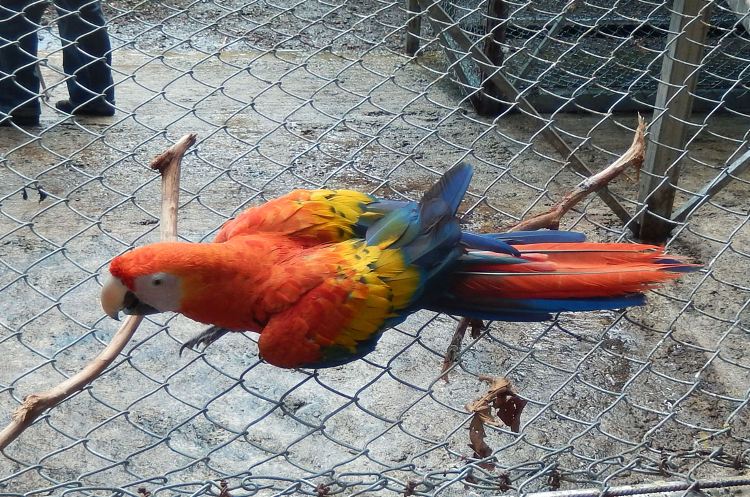 The temporary guests of Gaia Hotel and Nature Preserve are learning how to adapt to our area before being released.  This reintroduction project began with the construction of a huge cage that is large enough to allow the birds to fly as some did not know how on arrival.

The Scarlet Macaw has been sighted by the U.S. Fish and Wildlife Service (USFWS) which lists endangered species regardless of their location, as warranting protection and recommends they be added to the Endangered Species List as well as 3 other species of macaws.

There is a fine of $13,000 for keeping a Scarlet Macaw in captivity in Costa Rica.

The scarlet macaws of Jaco/Hermosa Beach and some surrounding areas have been showing signs of defects due to inbreeding. The birds at Gaia are part of a project to introduce 13 new gene pools to the population and produce a biological corridor from Jaco to the Osa Pennisula.

They have been raised at a reproduction center in Santa Ana; developed and maintained by Alessandro Pomo. They are also part of Regente Proyecto de Liberación de Ara Macao for Silencio and Alejuela under Alexander Arroyo of the National University of Veterinarians of Costa Rica. They are also under the protection of MINAE , Ministry of Environment & Energy for Costa Rica.

Breakfast for these magnificent birds looked good enough to eat. It featured a selection of fresh fruits and a choice of nuts – all it needed for my taste would have been a little yogurt! They are being encouraged to eat foods that they will find in our area.

The plan is for an April release of the first 20 macaws if they appear to be ready and to release approximately 100 over the next two years. They are under the care of Veterinarian Pablo Milan.  When the release takes place the sides of the cage will fold down allowing the birds to fly out.

There will no longer be food placed in the cage but instead in the surrounding trees. There will be some birds that will choose not leave and those will be returned to Santa Ana for reproduction purposes. Macaws mate for life and already 6 pairs have formed in the group of 20. Gaia will gladly accept donations of fresh fruits, almonds and cashews to help with the feeding. They also allow people to view the birds but ask that you call first with a group of no more than 4, preferably visiting in the afternoon around 1 o’clock for the afternoon feeding.

I would like to thank Bernardo of Gaia for my personal tour with the birds and Boris Marchegiani of Gaia for taking the time to visit with me concerning this wonderful project. I hope to be invited to the release and can’t wait for the day these beautiful birds are seen once again in the Quepos/Manuel Antonio area. Thank you to Gaia for providing this project with space and funding. To arrange an appointment call GAIA at: 2777-9797

Article by Quepolandia, reprinted with permission

QCOSTARICA - Good news for Ticos with traveling fever! From Friday, June 25, Germany will allow entry of travelers from Costa Rica as long...
Infrastructure