Juliana Herz On Living In The Jungle, Eating Bugs On Fox Reality Show 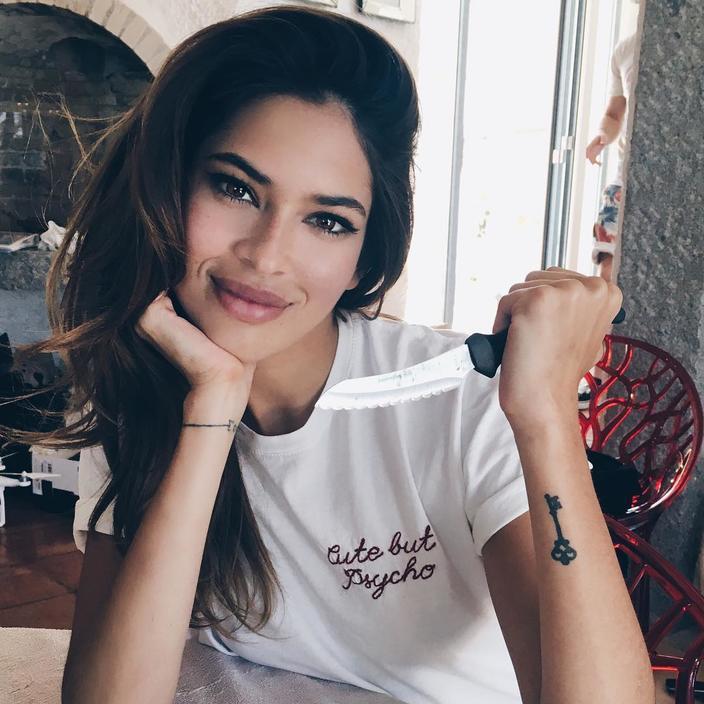 COSTA RICA EXTRA – Juliana Herz is unstoppable. The Costa Rican swimsuit model, who made a big splash in 2016 as Surfing Magazine’s cover girl, spent last summer in Fiji — but this wasn’t for another glamorous photoshoot.

Remaining focused on her goal of reaping new successes and transcending her beauty beyond the runways, Juliana was in Fiji competing in the new FOX reality series, “Kicking & Screaming” where she had to survive the remote jungle for a chance to win US$500,000. Juliana, along with other contestants, were teamed up with expert survivalists and were forced to skip the glamping and instead, overcome extreme weather conditions, raging rivers, as well as feast on insects to out beat hunger.

They never stopped filming. They literally filmed us 24/7. Even when we were sleeping, the cameras were on us. The only time they weren’t filming us was when we would have to go to the bathroom.

On Thursday, March 9, the same day Kicking & Screaming aired on Fox, Juliana, 27, gave us a glimpse of her role in the show.

Juliana said the opportunity was brought up by her modeling agency,Elite Management, who thought it would have been a fun way to show off her personality a little bit more, and of course, to show that modeling isn’t just about looks, “that models can do crazy things and not just want to stay in their little bubble. “I thought it would have been fun and it was!”, said Juliana.

I’m soooo excited to finally be able to share this with you guys!! As some of you may remember, last summer I disappeared from the map for a month and this is the reason why! This is probably the craziest experience I’ve ever lived and can’t wait to see it on tv. Can you guys spot me? Hint: I’m in it 4 times? how far do you guys think I made it?? ? @kickingscreamingfox

Given than many people are skeptical of reality TV, in an interview on Fox News, Juliana was asked how much of it was real.

“That’s funny, I actually get asked all the time by my friends, ‘So did you go to a hotel after they stopped filming?’ Well for one, they never stopped filming. They literally filmed us 24/7. Even when we were sleeping, the cameras were on us. The only time they weren’t filming us was when we would have to go to the bathroom, which wasn’t a bathroom by the way. We were still in the jungle. It’s not like we had a toilet that you could flush. Everything was 100 percent real, honestly. I can’t really say that anything was made up because it wasn’t. We were always hungry, we were not sleeping on beds. Everything you’ll see on TV is what we did in reality,” said Juliana.

As to her relationship with the other constants, the Tica model said she got along “really well” with all of the girls.

“I mean…you’re in the jungle, there’s no food, you’re sleep deprived, you’re hungry — all of your emotions are heightened. Something that might seem so tiny in everyday life became so much bigger in this situation. And you’re living with these people 24/7, people you’ve never met in your life. From sun up to sun down, you’re with them. You’re sleeping next to them. It was tough for all of us to get used to that and to get used to the different personalities that were there. We’re all so different and come from various backgrounds. But, I think we tried our hardest to work well together. There wasn’t as much drama,” said Juliana.

Tune into fox March 9th to find out why I’m so muddy and happy! Get ready to cheer my teammate @bendomian and me on ? 3 more days! @kickingscreamingfox #teamwhite

“I thought it was going to be fake (eating insects in the jungle) and that once the cameras would be turned off we would get real food, but we quickly learned that it was not going to be so; In fact I discovered it from the first day when I was starving and we had nothing to eat. One of girls told me: ‘You know, bugs are a source of protein’ and I had to accept that reality. I really like bacon and none of the bugs that I ate tasted like bacon,” she said.

With which she had no problem, Juliana said, was with the liquids, as in the jungle there was a source of clean water that kept her hydrated during the time in the forest. “It was nice because I did not have to drink anything weird,” she said before mentioning that once he finished taping the show all she does is eat.

The show that aired on March 9 is a condensed version of the exhaustive filming around the clock for several weeks (the model did not specify how many weeks).

“Honestly, everything was one hundred percent real,” Juliana assured.

Now that her experience is over, does Juliana consider herself to be a survivalist?

“Oh God, no. Not even close! And the next time I go camping, I will go with a tent, at least a sleeping bag and a lot of food! For sure, a lot of food. My biggest issue the whole time there that I was always hungry and I was always cold,” said Juliana.

- Advertisement -
Paying the bills
Previous articlePut it Under the Mattress – Or Spend it!
Next articleVenezuela Wins Lawsuit Against ExxonMobil

Costa Rica is a country filled with beautiful nature, miles of...
Read more