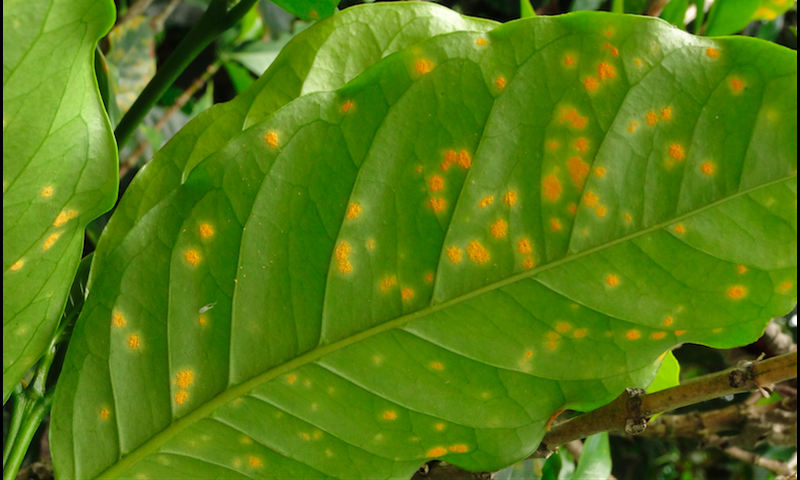 (AP) — The U.S. government is stepping up efforts to help Costa Rica and other Central American farmers fight La Roya coffee rust, a fungus that has caused more than US$1 billion in damage across Latin American region. The fungus is especially deadly to Arabica coffee, the bean that makes up most high-end, specialty coffees.

Already, it is affecting the price of some of those coffees in the United States.

“We are concerned because we know coffee rust is already causing massive amounts of devastation,” said Raj Shah, head of the U.S. Agency for International Development. told Associated Press (AP).

On Monday, he was expected to announce a US$5 million partnership with Texas A&M University’s World Coffee Research center to try to eliminate the fungus.

But the government isn’t doing this just to protect our US$4 specialty coffees, as much as Americans love them. The chief concern is about the economic security of these small farms abroad. If farmers lose their jobs, it increases hunger and poverty in the region and contributes to violence and drug trafficking.

Guatemala, El Salvador, Honduras, Panama and Costa Rica have all been hard hit.

Much of the blander, mass-produced coffee in the United States comes from Asia and other regions. Most of the richer, more expensive coffees are from small, high altitude farms in Central America. Because the farms are smaller, farmers there often don’t have enough money to buy the fungicides needed or lack the training to plant in ways that could avoid contamination.

The rust is a fungus that is highly contagious due to airborne fungal spores. It affects different varieties, but the Arabica beans are especially susceptible. Rainy weather worsens the problem.

So far, major U.S. coffee companies have been able to find enough supply to avoid price increases. But some smaller outfits already have seen higher prices, said Ric Rhinehart of the Specialty Coffee Association of America.

Rhinehart said the worst-case scenario is that consumers eventually will pay “extraordinarily high prices for those coffees, if you can find them at all.”

Larger companies such as Starbucks and Keurig Green Mountain Inc. have multiple suppliers across the region and say they have so far been able to source enough coffee.

“It’s a little bit too soon to tell what the impact will be on supply and long term quality over time,” said Lindsey Bolger, who heads up coffee sourcing for Keurig Green Mountain.