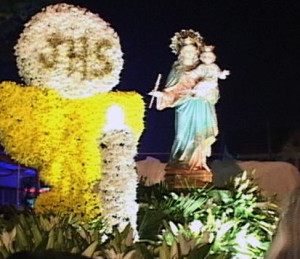 The activity, the ‘Las mananitas de la Virgen Maria Auxiliadora’, started at 4am as Catholics walk next to a float carrying the statue Virgin Maria Auxiliadora and then mass. For latecomers there was a mass at 7am, and another scheduled at 11am with Archbishop Hugo Barrantes.

The centre of activity is at the Casa María Auxiliadora, next to Colegio María Auxiliadora in Barrio Don Bosco (located near Paseo Colón, one block south of Purdy Motors, the Toyota dealership).