LATIN AMERICA NEWS — “Latin America lives today new times and in this period, following 10 years of work with undeniable achievements, the Bolivarian Alliance for the Peoples of Our America (ALBA) is confronted with the challenge of consolidating itself”, said ALBA’s executive secretary Bernabe Alvarez.

“ALBA has the peculiarity of bringing together political forces that share a common project within the diversity”, Alvarez told the Prensa Latina news agency. 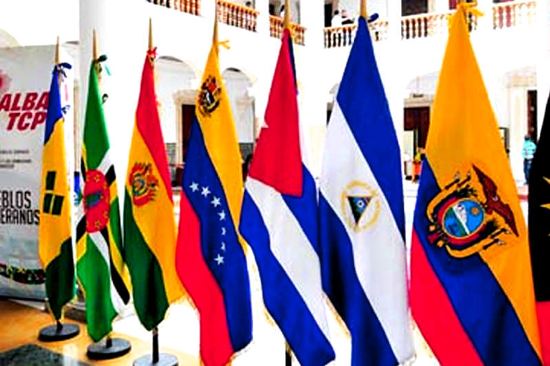 “But it is also aware of other Latin American mechanisms of integration, which play an important role too, like the Union of South American Nations and the Community of Latin American and Caribbean States” he said.

“We aspire to be the political consciousness for the left-wing in the progressive world within the new Latin American integration, with respect, but making everything is needed to include the transformation and social agenda in the Latin American debate. There is the challenge”, he said.

“The challenge is to continue supporting integration and being the expression of that political vision of transformation within Latin America”, said Alvarez.

Dr. Alvarez, along with the ambassadors from five country members of ALBA accredited to Argentina, began yesterday a program of activities in Buenos Aires to commemorate the tenth year of this bloc for the integration of nations.

ALBA was created in Havana on November 14, 2004, the charter of which was signed by the Presidents Fidel Castro and Hugo Chavez, and despite pressures and attacks it grew with substantial achievements in human and social development, as well as economic growth across its 10 country members.

ALBA emerged as an alternative to the traditional integration options and 10 years later “is a powerful political alliance that assumes joint standpoints to defend the rights of the mother Earth, human rights, and against interventionism and war”, said Dr. Alvarez.

“ALBA has had many achievements, like the 3,482,361 people that have recovered sight through the Operacion Milagro program or the 1,285,089 differently abled people who have received treatment, 864,678 out of whom have been provided with prosthesis for their assistance.

QCOSTARICA - Sinpe Móvil is easy to use. From your phone, you can send money to friends, family and pay for things. Or receive...
Infrastructure