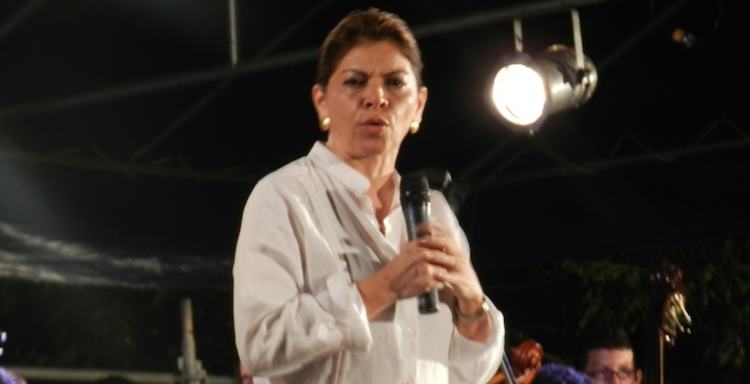 Having her agenda cleared for Thursday morning, Presidenta Laura Chinchilla took the opportunity to visit the Murciélago police school, which operates on a 57 hectare estate, facing the ocean near the Nicaragua border, which belonged to former Nicaraguan dictator Anastasio Somoza, expropriated in 1978.

The presidenta’s Thursday morning agenda cleared up with the decision the night before by Nicoya city council, changing the commeration ceremonies from 10am to 5pm, amid fears of protests against the government.

At Murciélago, Doña Laura delivered 40 double traction police vehicles to the Ministerio de Seguridad Pública for  use in border patrol and saluted the 195 police officials being trained in border security.

The police unit protects, especially, the 160 kilometre trail that runs parallel to the San Juan river.

The announcement of more police presence along the border comes four days after it was learned that Nicaragua is alleged to be offering Costa Rican territory for oil exploration concessions, and possible new demands against Nicaragua for the violation of Costa Rica’s sovereingty.

This latest action by the Daniel Ortega administration caused tensions to increase since the alleged invasion by Nicarauga in 2010 of the Isla Calero, in the northern Caribbean, triggering an international court battle that is still before the International Court in The Hague.

In a press release, Chinchilla said yesterday that the government “will continue to strengthen security along the northern border, both to protect the sovereign rights of Costa Rica who were affected by the intrusion to Isla Calro as combating drug trafficking and in defense of rights of Costa Ricans and Nicaraguans in the area “.

In the statement, the Presidenta added that the government will, first, open a Coast Guard station in Cuajiniquil, Santa Cruz,  “which will provide major maritime control,” said Casa Presidencial.

The second, is to build a “coyote station” in Nandayure, a station with an area of 1.500 square metres and will dock a surveillance vessel valued at US$300.000 dollars.

Back in Nicoya, Doña Laura arrived 45 minutes late, when forced to travel by car after the police helicopter ran into mechanical problems. The tardiness was also due to the Presidenta’s stop at her hotel room at the Riu Guanacaste in Playas del Coco.

In Nicoya, rain dampened the anti-government protests by the 34 groups that make up Foro de Guanacaste and trade unionists led by Wilmar Matarrita, linked to the Frente Amplio and with electoral aspirations within that party, the protestors kept their word to march through the centre of Nicoya.

In the end, what appeared could have been a difficult day for Presidenta Laura Chinchilla, in minutes after 5:45pm the Presidenta and her cabinet their session and went home.

- Advertisement -
Paying the bills
Previous articleWhy Does Costa Rica Keep Shooting Itself In the Foot?
Next articleEfficient Transportation Could Save Billions