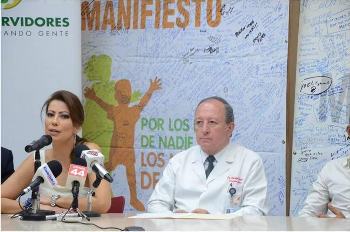 The endorsement of Hernandez comes as a real feather in the cap of Dr. Hernandez who is a political novice. Malavassi is a respected intellectual, a lawyer and university educator linked with UACA, one of the oldest private higher education instutution in the country.

Malavassi said that he had waited until Wednesday to announce his support so as not to incur jealousy in the ranks of Unity. He said he would not only support Hernandez but would, should the latter win the 2014 election, aid a Unity government in any capacity where he might be useful.

The academic did say, however, that he preferred to aid the Unity candidate in economic affairs, especially in creation of employment. But he emphasized that he did not ally himself with Unity to edge one of the party faithful from his future job.

The academic is the son of longtime Unity adherent Guillermo Malavassi, also an academic. The son said he made his decision to defect from Libertarianism after talking to Unity with an eye toward forming an opposition coalition. That movement did not prosper.

“Dr. Hernandez brings to Unity a clean flag,” said Malavassi, “We have known each other for a long time in a family setting and he is the best alternative to end the continuum (of National Liberation Party) in power.” He added that polls showed Unity’s chances improving while Liberation’s are declining.

Showing a very Latin tendency to base judgements on family, Malavassi noted that the candidate’s uncle is Alvaro Hernandez, Finance Minister in the administration of President Jose Jaoquin Trejos (1966-70) whose performance in the job impressed him. Malavassi said he was also impressed with Hernandez’s administration of the Children’s Hospital.

Malavassi said he was assured that the candidate of his choice would not fall victim to the forces of corruption that surround Unity, a clear reference to the indictments of former president Rafael Angel Calderon and Miguel Angel Rodriguez on celebrated corruption trials.