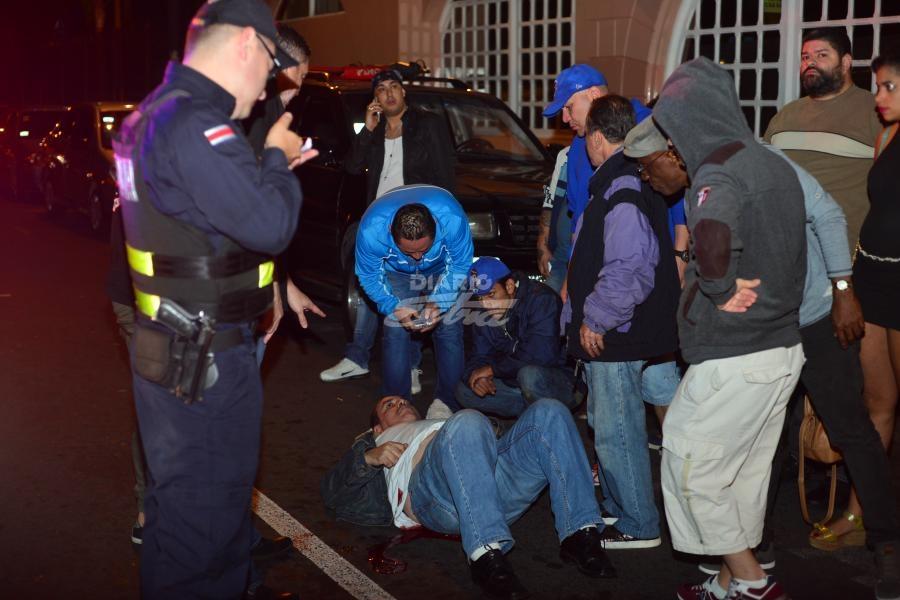 (QCOSTARICA) It was 1:30am Thursday when two men on a motorcycle shot a man outside the infamous Hotel Del Rey in downtown San Jose.

According to a report by the Diario Extra, the man, identified as a Fonseca, 45, an area taxi driver, was shot twice in the belly.

The motive for the shooting by allegedly two gun-men, shooting while in motion, is unclear.

Several similar incidents have occurred in the area of the Hotel Del Rey, a night (and day) spot well-known by locals and foreigners as a place for gambling and women offering sexual services in exchange for payment.

The area around the hotel is commonly known as “Gringo Gulch”, an area that includes, in addition to the Del Rey hotel, Key Largo, bars and casinos catering to San Jose’s seedier side of night life.

With notes from the Diario Extra report by Esteban More, photo credit to Mauricio Aguilar

A call to 911 reported an alleged person deceased inside the...
Read more

QCOSTARICA - Public worker unions from the Education, Health, Judiciary, Transport, and public universities, among others, will join forces this Friday, March 5, in...
Guatemala

Q24N - Guatemala on Tuesday received 200,000 doses of the vaccine against covid-19 donated by India, which it will use to complete the immunization...
Living in Costa Rica

QCOSTARICA - The Ministry of Public Works and Transportation (MOPT) announced Thursday that it will grant a grace period for six (6) more months...
Nicaragua

TODAY NICARAGUA – Nicaragua, on Tuesday, March 2,  began to apply the Russian Sputnik V vaccine against covid-19 to people with chronic diseases, in...
Banking

QCOSTARICA - Loans in dollars, which had a great boom in 2000, began to slow down since 2016 and today, despite the fact that...
Latin America

Q REPORTS - Poverty in Latin America increased in 2020 to the highest levels in the last 12 years, reaching 33.7% of the total...
Greater Metropolitan Area

QCOSTARICA - Before I get into my opinion of the irresponsible actions of the immigration service and the ICT, good news for tourists who...
News

QCOSTARICA  - Twenty eight Costa Rican's are lining up who want the position that Carlos Alvarado when he leaves office on May 8, 2022,...