More than 30 unions will participate in this Friday's demonstration

QCOSTARICA – Public worker unions from the Education, Health, Judiciary, Transport, and public universities, among others, will join forces this Friday, March 5, in the great concentration that will take place in downtown San José. 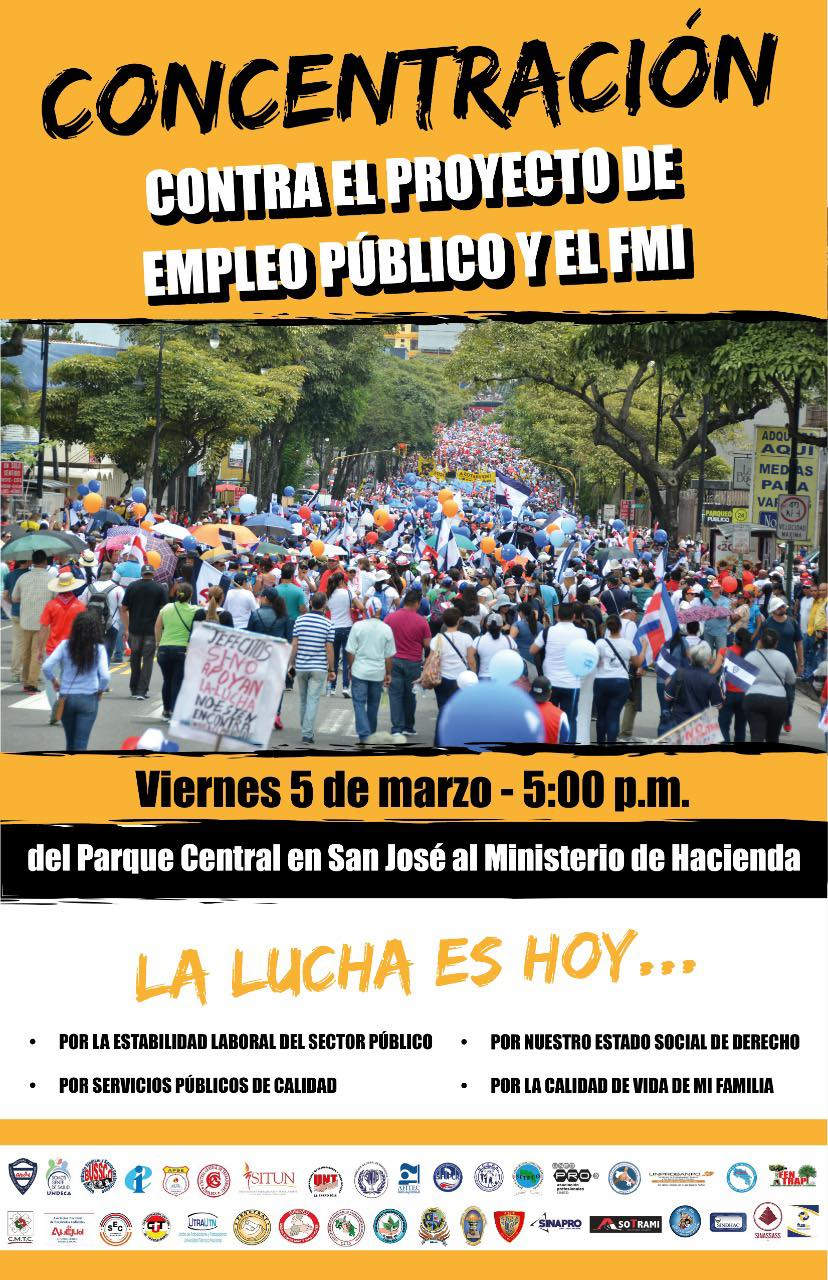 According to the convocation poster published on social networks, at least 30 unions have confirmed their participation in the event that seeks to stop once again the public employment project and the agreements with the International Monetary Fund (IMF).

The demonstrations are expected to concentrate along Avenida Segunda, from where to where it remains to be seen.

If need to be in San Jose in the late afternoon, better to arm yourself with patience and look for alternate routes out of downtown, especially on Avenida Segunda and surrounding areas.

You may also like: ‘We want to work!’: Entertainment industry cries out to Government

The call to gather is for 5:00 pm, but expect mobilization of people from 3:30 pm onwards when most of the public sector offices close for the day.

The movement will leave the Parque Cental and then move towards the Ministry of Finance, a couple of blocks east, where the protesters are expected to remain indefinitely, aiming to show their discomfort with the IMF loan conditions, that if fully approved, will see their labor rights trampled.

QCOSTARICA - KLM announced, this Monday, April 19, that it will...
Read more

QCOSTARICA - "If we don't give stability to our economy, forgive...
Read more

QCOSTARICA - The number of patients with covid-19 is advancing by leaps and bounds. This Monday, 571 people were hospitalized, 263 in an Intensive...
Breaking

QCOSTARICA - The sharp increase in the number of new daily cases of covid and people requiring hospitalization is the reason for the bringing...
Nicaragua

TODAY NICARAGUA – The Nicaraguan Legislative Assembly, controlled by the ruling party, is preparing to renew the electoral tribunal, amid requests from civil society...
Economic Recovery

QCOSTARICA - It's only the middle of April but it felt like September/October between Wednesday and Thursday, as the rains continued for more than...
Cuba

Q24N (La Habana) Cuba turned the page on the governments of the Castro brothers, with the retirement on Monday of Raúl Castro, 89, in...
Limon

QCOSTARICA - For the third consecutive night, the Ruta 32, which connects San José with Limón, was closed from 7 pm Friday and until...
National

QCOSTARICA - The heavy rains have not let up in the Caribbean. Although in some areas a few rays of sun came out this...
Latin America

Q REPORTS (NY Times) When Raúl Castro retired as Cuba’s top leader Monday, he left a warning for a nation increasingly divided over the...