Mexican comedian Adal Ramones, who quite playfully admits he wants to naturalize as a Costa Rican citizen, got a trifle ahead of the game, saying that if he could vote in the 2014 elections in February, he wouldn’t vote for that “cheapskate Johnny” Araya. 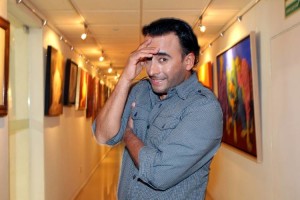 The National Liberation Party candidate’s wife, Sandra Leon, greeted the sally with good natured laughter. Ramones was profiling the “typical student who wants to be President when he grows up.”

Ramones sent the 4,000 in the audience into stitches by suggesting that he would never vote for Araya, even “as class president.” The crowd Saturday at Palacio de Deportes was a sellout. Ramones was on stage for two and a half hours, risky for a standup comedian,

The inclement weather halted the show for 10 minutes, waiting for the riotous rainstorm to subside. (La Nacion writer Gloria Corrales, taking humorous inspiration from Ramones, observed that if the comedian wants to become a Costa Rican he had better be prepared to keep his good humor for the plantina bridge saga, Bailey bridges and the Circunvalacion mess.)

But the would-be naturalized Tico showed his real colors when it came to Mexico’s struggling soccer team. “Now that you guys are in the World Cup, what would it cost you to let us win?” he asked plaintively.

Ramones is a great favorite among Ticos who did not even bristle when he called the national All Star soccer team, “baby calves,” for their generally short stature compared with taller European players. Besides being a great admirer of Costa Rica, he has put his money where his mouth is and couldn’t resist a few plugs in his act for his bar that he invested in on La Sabana, La Bodeguita del Medio.

QCOSTARICA - The pandemic caused by Covid-19 fuels the strategy of positioning Costa Rica as a world destination to develop wellness tourism, since travelers...
Pura Vida

TODAY COSTA RICA - Original text published in La Nacion on June 23, 1971 - A conflict over air routes, has been unleashed between...
Trends

Are you thinking about becoming a casino dealer? If you’re a Hungarian citizen, we’ll tell you more about what you need to know. You...
Trends