Mobilization of Cuban Migrants From Costa Rica Will Resume on Feb. 4

QCOSTARICA – Authorities from Central America meeting Guatemala Wednesday, agreed that the second part of the operational plan to mobilize the Cuban migrants stranded in Costa Rica, will start on February 4.

According to a statement by Costa Rica’s Foreign Ministry (Cancillería), two weekly flights will facilitate the Cuban migrants in reaching their final destination, the United States.

The test run of the first group of 180 Cuban migrants occurred on January 12, landing at the El Salvador airport and then bused by land to Guatemala and the Mexico border, reaching the U.S. a few days later.

Many are already in Miami, posting messages on the social media and expressing to the local and international press of their “gratitude with Costa Rica”.

“My son is out of danger, is already in the country of freedom,” a father expressed to EFE, while showing concern especially for women and children continued stranded in Costa Rica.

“I am grateful for life with Costa Rica,” Odalanier Díaz, 27, told EFE, for whom the jungle crossing between Colombia and Panama was the “scariest”.

In Miami, on the presidential campaign trail, U.S. Sen. Marco Rubio, has said the Cubans stranded in Costa Rica should not enter the United States, causing a backlash reaction from the Cuban community in Miami.

Rubio said before the Cuban migrants test run, he would be introducing legislation to address unbridled abuses of refugee aid to Cuban migrants, joining other influential Cuban Americans in the U.S. Congress calling for an end to abuses documented in a Sun Sentinel year-long investigation of abuses of the Cuban Adjustment Act that found welfare meant to help Cubans settle in America was instead funding life in Cuba.

Back to Costa Rica. Foreign Minister, Manuel Gonzalez said, “satisfaction of the countries concerned regarding the successful outcome was confirmed, which now allows us to move to a second stage, with two weekly flights”.

Gonzalez said the same route will be continued. The first group Costa Rica on a flight from Liberia to San Salvador, then moved by bus through El Salvador to Guatemala, to the Mexico border, where they were issued a 20 day visa to travel the country to the U.S. border.

As in the first run, the Cuban migrants have to foot the bill of the airfare and ground transportation.

The Foreign Minister added that priority will be given to family groups with pregnant women and children. 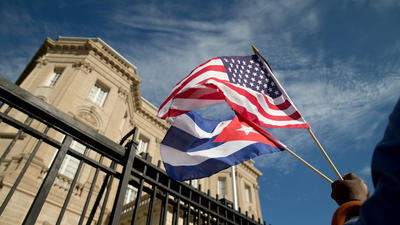 Although almost 8,000 was the number of Cuban migrants stranded in Costa Rica, the number is said to have been reduced by a couple of thousand or more, migrants deciding to take their chances on the “coyotes” (smugglers) or on their own to illegally cross into Nicaragua, a country that has closed their borders to the Cuban migrants since the middle of last November.

It is reported that the Cuban migrants still in Costa Rica will be visited by immigration officials, to renew their “exceptional visa”, in the event it has expired.

- Advertisement -
Paying the bills
Previous article2016 Temperature in Costa Rica Break 52 Year Record
Next articleCosta Rica Court: Growing Marijuana For Personal Use Is Illegal, But Not A Crime