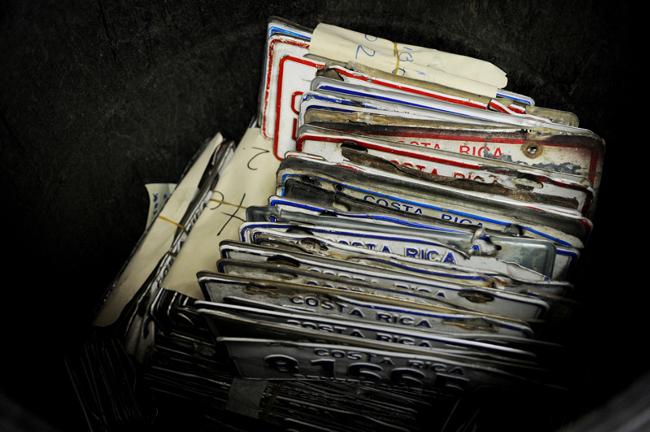 It wasn’t the usual Monday at the Consejo de Seguridad Vial (Cosevi) yesterday for workers at the license plates department in La Uruca (San José), who found their workload increased by the more than 1.000 license plates seized this past week by the Policía de Tránsito. 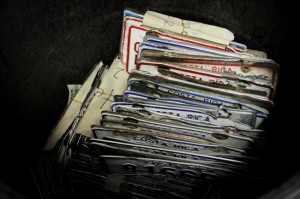 In total, in the first 5 days of the new year, Tránsitos seized 1.045 license plates from drivers in vehicles without the 2014 Marchamo or circulation permit.

The line on Monday was half a block (50 metres) of drivers who before recovering their plates had to pay the Marchamo and the ¢49.000 colones fine.

Making matters worse, as Luis Miguel Herrera of La Nacion narrates, it wasn’t until 10am when three boxes of seized license plates were available to their owners (who paid). It also explained why the line from the early hours of the morning had not moved along.

In addition to the three boxes received Monday morning, the Cosevi warehouse is overfull of seized license plates, stacked in three six row shelves, alongside a wallboard holding keys of seized vehicles.

The process. Once a license plate is seized by a Tránsito it is delivered to the Cosevi offices where it will remain until the registered owner or  authorized representative comes to make a claim.

But before the plates are returned to the owner, all traffic tickets and fines – and not only the ticket(s) for the reason the plate was confiscated – must be paid in full. The payment is made at the local bank and NOT at the Cosevi directly.

According to Jorge Sandoval, head of the Placas del Cosevi, the plates are also returned to the owner if her or she files an appeal.