More Than 7,000 Guatemalan Children Involved in Crime in 2013 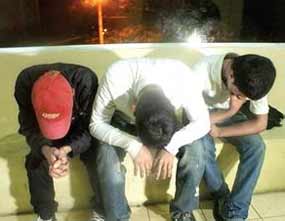 Minors involved in crimes in Guatemala in 2013 amounted 7,518; 3,227 more than the previous year, according to data of the Guatemalan attorney published here in this capital. Children and teenagers participated in rapes, murder, kidnappings and extortions, according to the official source.

Children of this Central American country are recruited since their six to transport illegal narcotics, arms and messages among gangs, revealed a research published in 2013 by the Deputy Minister of Prevention and Childhood of the Interior Ministry, Arkel Benitez.

That research showed that children between 13 and 17 years old are forced to commit crimes, which is part of a ritual to show the affiliation to the anti-social group they belong.

In this regard, Benitez asserted that those minors should not be called hired assassins since they are forced to kill.

The Gang members, emphasized the analysis, threaten and offer incentives to minors with the purpose to engage them.

Various researches noted that violence is a structural problem in this nation, where 6,072 people have been murdered during 2013; 47 more than the figure reported in 2012, according to official data.

QCOSTARICA - Puntarenas is the only province in the country that has a contagion rate or "r" rate greater than 1. This is detailed in...
Tourism

QCOSTARICA - This Sunday, the Guanacaste Airport - a member of the VINCI Airports network - received the first of the daily flights from...
HQ