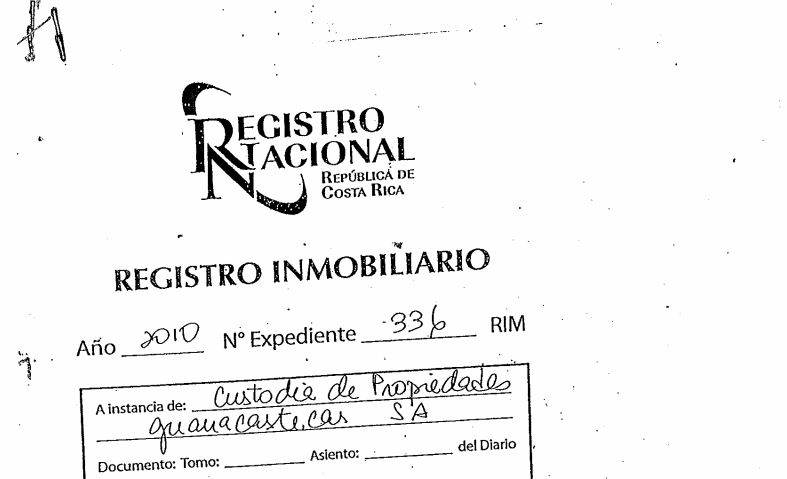 The notifications are part of a research process that the National Registry began to resolve alleged inconsistencies and registration contradictions found in large part in what is known as the American Project, now named Playas de Nosara.

Evidence of the alleged inconsistencies was found during a study of 216 pages done by the National Registry in March of 2013.

“People are being notified that there is a report that details a bit what the land survey and registry situation is for those properties. It is just in a research phase and communicating the results of the study with people,” explained Oscar Rodriguez, director of the National Registry.

Those warned should give a fax number “to hear future news” from the National Registry.

What is an Administrative Warning?

An administrative warning only has the effect ofregistry publicity, which means that it functions to inform third parties that an internal administrative process, or an investigation, is underway to determine whether or not registry anomalies exist.

They are not definitive and do not stop the sale of real estate, which is why they do not suspend construction, expansion or land sale permits.

In Nosara’s case, the warnings are the indirect result of a case from 2010, in which the company called Custodias de Propiedades Guanacastecas S.A.claimed ownership of a 221-hectare farm located in Playa Guiones and a large part of the farm called La Tigra in the mountains behind Guiones. It is because of that complaint that the National Registry began its investigation.

Despite the fact that the complaint was lodged in 2010, it wasn’t until 2013, with the study of 216 pages, that the registry anomalies were understood in depth.

According to the director of the National Registry, “A request was made for us to analyze those properties and while analyzing them, a domino-like effect was created. We realized that others appeared that have possible inconsistencies.”

Rodriguez explained that the inconsistencies can be related to documents: “It could be that there are plats that are made wrong but the land is fine, so it would involve creating a [new] plat and correcting the situation.

Looking for an Alternative Solution

Brooke Shields, the agent for Custodia de Propiedades Guanacastecas S.A., expressed frustration with the registry’s decision to apply administrative warnings to properties that do not belong to the farm they claim, and said that “several times we went to request that the registry not involve other farms in the investigation. [We told them] that our request only involves 86 farms, but they rejected us.”

The Nosara Civic Association (ACN –Asociacion Civica de Nosara), which currently is the owner of several properties claimed by Custodias Guanacastecas, is also seeking to remove the warning from farms that are uninvolved with the litigation.

On Monday, September 21, ACN sent a document titled “Proposal of Alternative Conflict Resolution Procedures” (Propuesta de procedimientos de resolucion alternativa de conflictos)to speed up the resolution process, as “it is seriously affecting the district, its investment climate, the demand for property and related markets, such as construction.”

In the document, ACN proposes the establishment of a fixed cost per process, the intervention of the Federated College of Engineers and Architects through voluntary reconciliation and mediation procedures,and the removal of annotations on the properties that are not within the disputed area, among other requests.

The director of the National Registry requested that the notified property owners, “Remain calm, [because] we are justresearching; definitive decisions are not being taken.” He explained that two months after the last person has been notified, once the legal analysis of the properties is ready, “We will see what can be sortedout, what can’t be sorted out and decisions will be made, which could be to liberate the property or freeze it.”

Possible Steps to Follow for Those Notified with Administrative Warnings

1- Read the National Registry’s report. You should know and understand what your property’s possible inconsistency is. Look for an expert lawyer in the subject who can help you.

2- If you see that the National Registry was mistaken in marking your property with alleged inconsistencies, you have to demonstrate it during an audience,taking your deed and plat.

3- You can argue that you disagree with the annotation and that you want to resolve whatever potential irregularity through the voluntary conflict resolution process. In that way you will be telling the National Registry that you do not wish to go to court.

5- In the case that all neighbors are in agreement and there is a resolution, the administrative warning is eliminated from the system in some 18 months and the title is cleared.

6- If there is a problem and you cannot reach an agreement with the implicated parties, the issue will have to be resolved in court. Following the ruling, the elimination of the publication of the warning can take between five and six years.

- Advertisement -
Paying the bills
Previous articleSecurity Camera Captures Shooting In San Franciso de Dos Rios (Video)
Next articleRains in Guanacaste to End One Month Earlier Than Normal; Will Not Return until June 2016