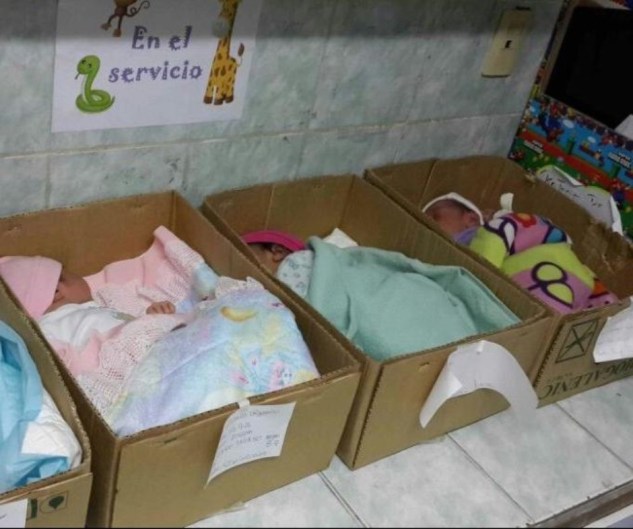 Shocking images from a Venezuela hospital reveal the extent of the country’s problems, lacking cribs newborn babies are placed in cardboard boxes.

The photos are from the Domingo Guzman Lander hospital in Barcelona, in the northeastern state of Anzoategui, leaked by a doctor who asked to remained anonymous, reaching out to opposition lawmaker, Manuel Ferreira, who posted them on his Twitter account.

“The babies spent all night in the cardboard boxes until the pictures were made public,” Congressman Manuel Ferreira told Fox News Latino on Thursday morning. “After that they discharged the babies to avoid further exposure.” 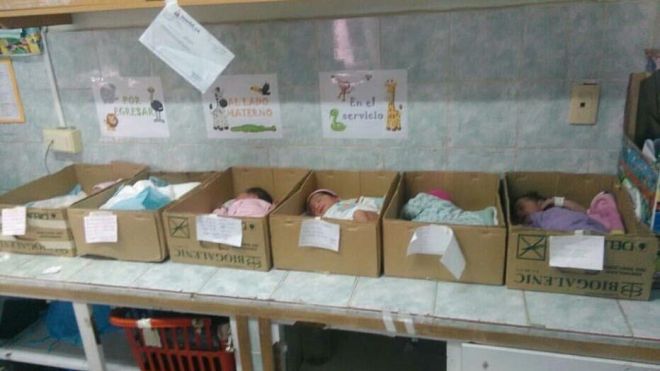 Ferreira added that the babies sleeping in cardboard boxes is just one instance of the demise of health care within Venezuela’s hospitals.

“This week we had 15 cases of newborn deaths here in Anzoategui’s Razetti hospital,” he told FNL. “Mothers are not fed properly and babies are born really weak. On top of that, the shortage of medicines and vaccines creates a mortal situation that is like a death cocktail.”

Everything from common painkillers to cancer and HIV drugs have become almost impossible to find across the country and some doctors have resorted to using veterinary medications in lieu of human ones — according to the Pharmaceutical Federation, the shortage of medicines is more than 80 percent. 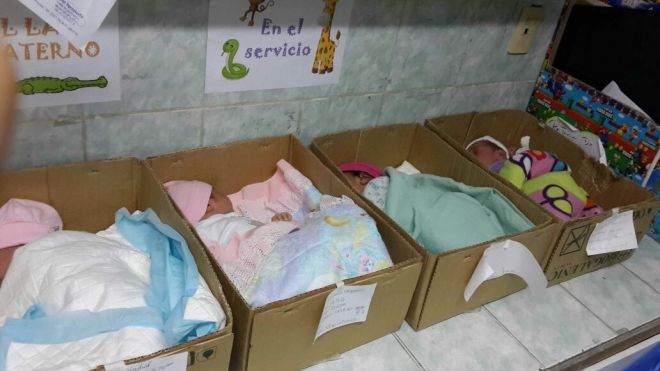 Some hospitals are working with just 5% of the medical equipment that they need and around 13,000 doctors (more than 20 percent of the medical staff in the country) have emigrated in the last four years. he president of the Venezuelan Medical Federation Douglas León told the Daily Mail.

Venezuelan officials reacted angrily to the images of the newborn babies and claimed that the media was manipulating images to paint the country’s hospitals in a bad light.

“We do not justify the actions taken by a professional without the authorization of the management,” Carlos Rotondaro, the country’s director of social security said. “Our hospitals have to deal with hundreds of patients despite the efforts of the media to manipulate things. Unlike many, we recognize our fault and we continue.” 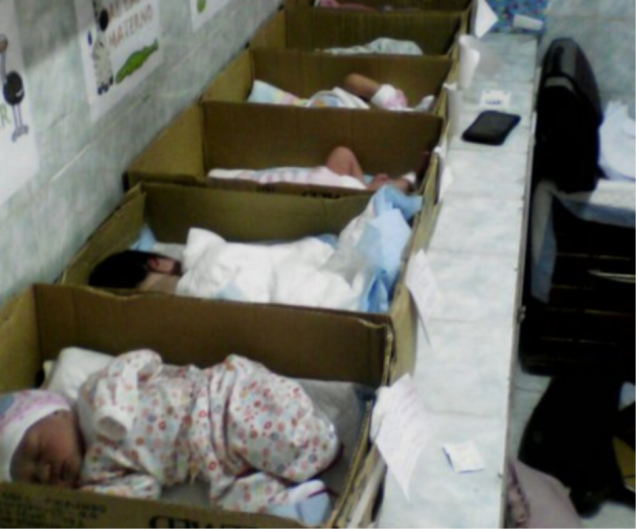 The shocking images of the babies inside cardboard boxes came to light at the same time that many Latin American leaders at the United Nations General Assembly are decrying the decaying political situation in Venezuela.

“It is unavoidable that I mention our concern for the very critical political, economic and social situation that our friendly nation of Venezuela is experiencing,” Peruvian President Pedro Pablo Kuczynski said.

“Full-fledged democracy requires absolute respect of human rights and fundamental freedoms, as well as due process. It also requires the full guarantee of the respect of the separation of powers and checks and balances.”

Since global oil prices plunged in 2015, Venezuela hasn’t had the funds to import basic goods such as food and medicine, creating acute shortages and stirring anger toward the socialist administration of President Nicolás Maduro.

Adding to the overall misery are a drastic rise in violent crime, especially in the capital city of Caracas, rolling blackouts and widespread and often times bloody protests against the government. There have been casualties and deaths on both sides of the protests and accusations from the international community of human rights abuses and political oppression.