The government of Daniel Ortega questions the message of the Costa Rican president in the Ibero-American Summit, in Guatemala, and tells him that he must 'see the disorder, the darkness, in his own home'

The government of Daniel Ortega did not hold anything back to offend President Carlos Alvarado for his criticism of the internal situation in Nicaragua.

The Ministry of Foreign Affairs of Nicaragua issued a statement Friday where it calls Alvarado, among others things, “ill-educated, meddlesome, contemptuous and snoopy” for what he said at the XXVI Summit of Heads of State and Government of Latin America, in Guatemala.

Nicaragua president Daniel Ortega canceled his participation in the summit, without a specific reason.

There, Alvarado said that “we are extremely worried and hurt by what is happening in the sister Republic of Nicaragua,” while urging for a “peaceful” exit to the crisis in Venezuela.

Fourteen governors and four vice presidents participated in the conclave, including those of Bolivia, Brazil and Mexico. Also participating was the King of Spain, Felipe VI, and the heads of government of that country and Andorra.

“The President of Costa Rica, who proclaims respect for the sovereignty of States and non-interference in internal affairs, acting as a tool for the interventionist policy of the United States, came to the table of this event with daring dissonance, ridiculous airs of grandeur and a voice of pro-imperialist superiority, incompatible with respect for the rights of others, which is peace,” said the statement from the Nicaragua Ministry of Foreign Affairs.

“The president of Costa Rica cries out demands for Nicaragua, for Venezuela, as a street lamp, who does not see or want to see the disorder, the darkness, in his own house, where since his arrival in Government, there has been a proliferation of social, economic and institutional conflicts, allegations of abuse and corruption, repression, injuries and murders,” adds the diplomatic note.

“Costa Rica has more than 10 weeks of a strike that has affected its economy and has represented brutality, abuse of authority, deaths and overbearing behavior in the social relationship with the citizen forces that demand changes,” the statement added.

“We emphatically reject the arrogant attitude and lack of intelligence or diplomatic sensitivity, that has exhibited this afternoon, in Antigua, Guatemala, Mr. Alvarado, showing a character of ill-educated, intrusive, contemptuous, and snoop that has characterized his speeches and his performance, in relation to a brotherly neighbor country, which has never harmed him,” said the document.

The statement closes indicating that “the smallness is delirious, attend your situation, Mr. President, that you do have it on fire!”.

Alvarado asks for diplomacy to pressure Ortega
What provoked the strong reaction of Nicaragua was Alvarado’s speech, where he stated that “dialogue (in that country) has remained as an echo that resounds only in the hearts of those who today cry with pain for a just and equal society, to achieve a democracy”.

Alavardo asked the international community to “make use of diplomacy, multilateralism and mediation as valid tools in the face of the serious events that are known” in Nicaragua, the AFP news agency reported.

Nicaraguan President Daniel Ortega is accused of harshly repressing his critics since April and charging against mobilizations, resulting in hundreds of deaths.

The Costa Rican president also expressed concern about the situation in Venezuela, for the “disrespect for the rule of law and the institutions themselves, as well as the repeated violations of human rights.”

“We reaffirm our commitment to contribute to overcoming the serious political, economic, social and humanitarian crisis that Venezuela is going through. The solution is a peaceful and negotiated solution, within the framework of international law,” he said.

Nicaragua’s Foreign Minister, Denis Moncada, was critical of Alvarado, saying he “has disrespected the sovereignty, independence and self-determination of the Nicaraguan people. He disrespects the principle of non-interference in the internal affairs of other states by transgressing the UN Charter.”

Moncada said he considers Alvarado acting “as a puppet of the United States against the Nicaraguan government and its people.”

“Our worker president, who was a trade unionist, and very well known, is at the order of Costa Rica to achieve a social dialogue, respectful, with the workers of Costa Rica who have more than 68 days on a strike against tax reforms,” he added.

Meanwhile, Cuba’s Foreign Minister, Bruno Rodríguez, expressed his full support for Nicaragua and Venezuela, after stating that they are victims of foreign aggression.

“We reiterate our solidarity with the Bolivarian Republic of Venezuela and the Republic of Nicaragua in the face of unilateral coercive measures, communication manipulation, threats and external interference,” Rodríguez said during his speech. 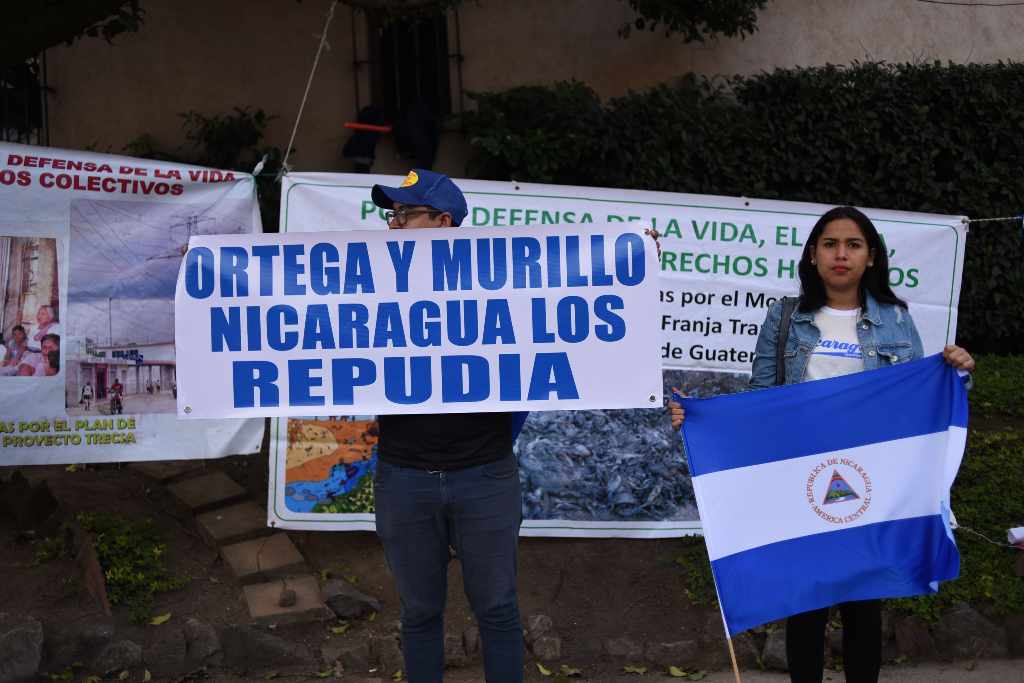 Despite the absence of Ortega at the summit, there were small pockets of protest. A group of Nicaraguans living in Guatemala indicated that Ortega’s presence is rejected. He is accused of stubbornly suppressing his critics and charged with mobilizations with hundreds of deaths.

With most of them with their faces covered, demanded that the Ibero-American governments condemn the repression in Nicaragua.

About 15,000 Nicaraguans live in Guatemala.

QCOSTARICA - The OIJ uncovered a big pothole on Monday when it was announced that public officials had allied with construction companies that, apparently,...
Economic Recovery

QCOSTARICA - The Ministry of Health issued a new guideline on Thursday that establishes the requirements to request the vaccination certificate against covid-19 in...
Turrialba